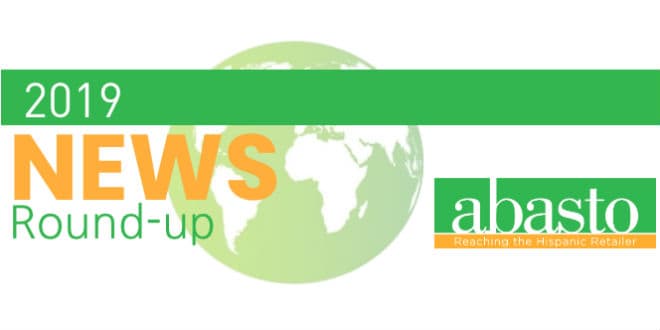 The year 2019 is coming to an end, as well as a decade that marked the transformation of the food and beverage industry, and the technological evolution in grocery stores.

During the past 52 weeks Abasto published the most relevant industry news in the United States, Mexico, and Central America, and below we present the most-read stories in our daily newsletter throughout the year:

In January, the president of México Andrés Manuel López Obrador announced 46 ProMéxico offices around the world will cease all operations by the end of February. Since 2007, ProMéxico was responsible for promoting trade, exports, and internationalization of Mexican companies.

UNFI announced plans to optimize its distribution center network in the Pacific Northwest. It will consolidate five distribution centers into a new 1.2 million square foot facility in Centralia, Washington and a newly expanded facility of 800,000 square feet in Ridgefield.

Southeastern Grocers to Close Another 22 Stores

Southeastern Grocers, the parent company for BI-LO, Harvey’s, Fresco and Winn-Dixie, announced that they are closing 22 underperformed stores over March.

Goya Foods in México, a Successful Plan That Keeps Growing

Goya Foods celebrates in May its first year of partnership with La Moderna in México. This alliance has allowed Goya to successfully expand the distribution of its food products in the neighboring country, where it seeks to continue growing.

U.S.-Mexico Border Shutdown Would be Catastrophic

What would happen if President Donald Trump carries out his threat and close the border with Mexico to pressure the neighboring country to stop the flow of Central American immigrants? The consequences would be economic and social chaos according to experts and politicians.

Walmart Tests the Grocery Store of the Future

Walmart chose its Neighborhood Market in Levittown, New York, to test what will be the grocery store of the future. With artificial intelligence-enabled cameras, interactive displays and a massive data center, this store brings to customers a taste of science fiction, but soon this type of store is going be part of the everyday shopping routine.

Nestlé USA announced that it will exit its company-owned frozen Direct-Store-Delivery (DSD) network for its Pizza and Ice Cream businesses and will transition to a warehouse model. According to Bloomberg, this action will result in the loss of 4,000 jobs.

Mexican tomato growers expressed disappointment that the U.S. Department of Commerce decided to terminate the Tomato Suspension Agreement (TSA) and subject importers of Mexican tomatoes to duties that will be passed on to U.S. consumers and disrupt the fresh produce market.

Thousands of employees from more than 500 supermarkets in Southern California are ready to go on strike if contract negotiation between seven United Food and Commercial Workers union locals and Ralphs, Vons, Albertsons and Pavilions supermarkets stalls.

The Producers and Packers/Exporters of Avocado of Mexico (APEAM) announced the investment of $12 million to build Casa APEAM, a new joint venture between Mexican and U.S. avocado growers and importers.

Northgate González CEO Receives the “Legends of the Industry” Award

For his vision and leadership in the grocery business, Miguel González, CEO of Northgate González Market, received the “Legends of the Industry” award from the Food Industries Sales Managers’ Club of Los Angeles.

Almost 4 Tons of Marijuana Found in Shipment of Jalapeños

Customs and Border Protection officers assigned to the Otay Mesa cargo facility seized almost four tons of marijuana mixed in with a shipment of jalapeño peppers. The pot is valued at $2.3 million.

Target launched Good & Gather, the company’s new largest food and beverage private label. As of September 15, 650 products are on sale in stores and online at Target.com for same-day delivery.

Superior Grocers is exploring new alternatives to continue growing in a market that is increasingly competitive. The independent supermarket chain adopted a new banner, The Market By Superior, and opened its first small-format store in California.

Walmart announced that John Furner will become the President and CEO of Walmart U.S., starting November 1, to replace Greg Foran who is leaving the company after five years in that role.

New York Post: “Goya Foods in talks to be sold to Carlyle Group for $3.5 billion”

The New York Post, citing unnamed sources, reported Goya Foods was in late-stage talks to sell a majority stake to The Carlyle Group in a deal that would value the canned-foods giant at roughly $3.5 billion. Goya CEO Robert Unanue responded emphatically that Goya is not for sale.

Amazon will open its first grocery store in Woodland Hills, a luxury suburban neighborhood in the San Fernando Valley in Los Angeles, expanding its footprint in the supermarket industry. The new store is expected to have a very different style from the one offered by its Whole Foods chain store, and Amazon Go.

Dean Foods, one of the largest dairy producers in the U.S., filed for Chapter 11 bankruptcy proceedings in the Southern District of Texas, citing the company has been suffering for the continuing decline in milk consumption.

Cardenas Markets announced its expansion west of Pomona, California. The Hispanic grocery chain will open its first store in the City of Whittier, in May 2020.

Mexico’s largest dairy company, Grupo LALA, reported that the results for the fiscal year have fallen short of stated goals and objectives aligned with strengthening the company’s profitability. For this reason, Mauricio Leyva will step down as Chief Executive Officer on December 31.

The House of Representatives voted 385-41 to pass the United States-Mexico-Canada Agreement (USMCA), a top priority for almost all agricultural and food groups. But, what is it and what it means for the food industry?