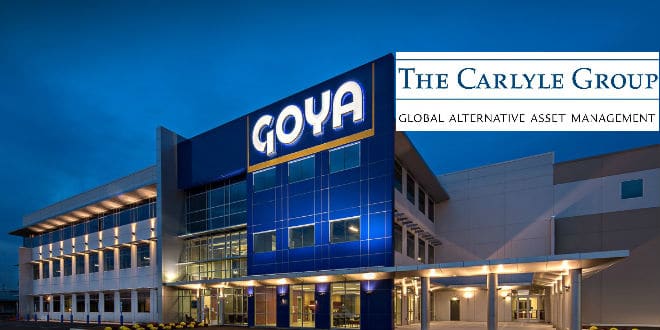 The New York Post, citing unnamed sources, reported Goya Foods is in late-stage talks to sell a majority stake to The Carlyle Group in a deal that would value the canned-foods giant at roughly $3.5 billion.

This is the second time, in less than five months, that the possible sale of Goya Foods has been reported. In May, CNBC announced the largest Hispanic food company in the U.S., owned by the Unanue family, had hired investment bank to explore its options include a sale of the 83-year-old company, which could obtain approximately $3 billion in a sale.

However, Goya CEO Robert Unanue responded to CNBC emphatically that Goya was not for sale. “The future of Goya is to continue to build our family legacy and to grow the brand worldwide. For these reasons and many more, Goya is not for sale.”.

The CEO of Goya continued his statement to CNBC, emphasizing that “over the years we have made acquisitions of other companies in order to expand the footprint of Goya Foods and we continue to do so. We periodically evaluate the company for estate planning and other purposes in the normal course of business.”

Despite Unanue’s statement, CNBC reported that Goldman Sachs had sent financial materials to private equity firms, something that companies do not usually do for estate planning purposes.

The New York Post article, citing sources close to the conversations, reported the process appeared to stall this summer when Unanue drove a hard bargain, insisting that America’s largest Hispanic-owned food company was worth as much as $4 billion.

As the exploratory sales process continued, the New York Post adds, Unanue also made clear its desire to maintain control of the fourth-generation family business, even in the case of a sale that leaves private equity companies as the only logical buyers.

The plan is for Unanue to remain CEO after the buyout.

The New York Post reported in its article that Carlyle seems ready to meet the demand of sellers that the deal does not burden Goya with too much debt.

Private equity firms typically put down about 35 percent of the purchase price in equity and have the company borrow the rest. In the Goya deal, however, the percentage they put down will be more like 60 percent, a source told the New York Post.

Responding to the article published by the New York Post, Goya Foods president, and CEO Robert Unanue sent the following statement to Abasto:

“Goya has a longstanding policy of not responding to rumors, however, the Company is not for sale. We are flattered, of course, that anyone would be interested in owning an iconic brand and business as ours. Our plans for our incredible Goya family is to continue this legacy into the future, even more successfully, for generations to come.”

In a brief statement sent to Abasto, Carlyle’s spoke-person said the private equity firm had no comments on the New York Post article.