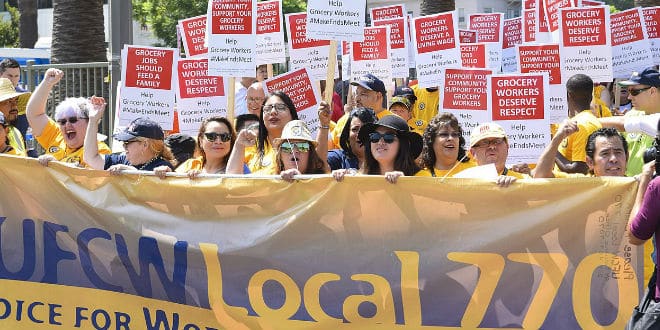 Thousands of employees from more than 500 supermarkets in Southern California are ready to go on strike if contract negotiation between seven United Food and Commercial Workers union locals and Ralphs, Vons, Albertsons and Pavilions supermarkets stalls.

The strike authorization vote was approved by unionized grocery workers on June 25th and it means union negotiators have the power to call for a strike, if deemed necessary, but it does not automatically mean a walkout will occur.

“Southern California grocery workers voted in large numbers, and overwhelmingly rejected the unfair terms that have been proposed by Ralphs, Albertsons and Vons,” said John Grant, president of United Food and Commercial Workers Local 770, according to a media sources.

The vote is also designed to put pressure on the employers, with the next three-day round of negotiations scheduled to start on July 10.

The decision to vote authorizing the strike, if necessary, was taken according to union leaders, because “corporations are delaying and demanding takeaways.”

The latest contract offer would cut salaries for general merchandise clerks and also reduce the pay of cashiers by downgrading their job classifications. Other workers would see pay raises of less than 1%.

City News Services reported that Albertsons/Vons/Pavilions issued a statement saying, “The outcome of the strike authorization vote does not change anything related to this process. We remain committed to negotiating a contract that is fair to all parties, including our employees, and will continue to work to achieve that.”

Ralphs issued a similar statement and said, for now, “it is business as usual in Ralphs stores. We’ll continue to negotiate in good faith for an agreement that is fair for our associates, as well as our company.”

On the other hand, UFCW Local 135 said about the vote authorizing the strike , “the time has come to show the corporations we won’t take this anymore and they need to get serious about a fair deal. This will show them we are united and ready to fight for what is right.”

A total of 46,000 workers are represented by the seven local UFCW unions in Southern California.

The vote comes nearly 16 years after the largest and longest grocery strike in U.S. history occurred in Southern and Central California, when thousands of workers picketed outside Albertsons, Vons, Pavilions and Ralphs stores for more than four months.

Overall, the companies in the labor dispute lost a combined $1.5 billion in sales during the strike, according to Los Angeles Times.