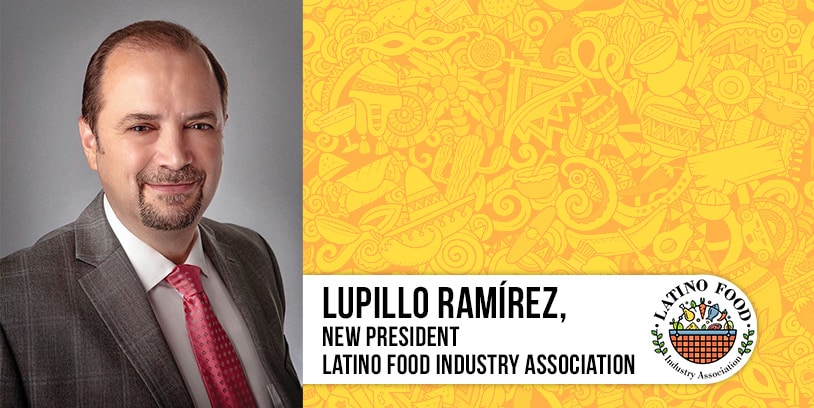 The Latino Food Industry Association (LFIA) Board of Directors named supermarket industry veteran Lupillo Ramírez as a new president of the organization.

Ramírez replaces Lilly Rocha, who left office in January after accepting the position of new executive director of the Los Angeles Latino Chamber of Commerce.

“It has been a pleasure working with this amazing organization as it’s President for the past two years. Passing the proverbial LFIA baton to Mr. Lupillo Ramírez is very exciting because he brings a lot to the table. With his background, knowledge, and industry connections, he will take the LFIA to the next level. I will remain the immediate past president and support our new president in all his endeavors,” said Lilly Rocha, who continues as a board member.

Lupillo Ramírez has been involved with the LFIA since its inception, first on the Advisory Board and then as a member of the association’s Board of Directors, representing the Hispanic supermarket chain Northgate Gonzalez Market.

The association, launched in August 2017, seeks to promote, support, educate and advocate for the thousands of Latino owners, employees, and entrepreneurs involved in every aspect of the country’s rapidly growing food industry.

In an interview with Abasto magazine, Ramírez spoke about his appointment as the new president of the LFIA and his long career in the Hispanic supermarket industry in the US.

“My work at the LFIA is the way I can contribute to the community, to support those who work in the food industry,” said Ramírez, who is of Mexican origin.

LFIA Board member Robert Alaniz noted that “adding Lupillo to the Board of the Latino Food Industry Association has added a new degree of credibility to the organization. His years of experience in the grocery industry and vast contacts will serve the organization well as he prepares to take us to the next level.”

“He is a leader who will have a positive impact on our industry and its ecosystem, especially an individual such as Lupillo so well regarded across the supplier industry,” said LFIA Board Member Martha Montoya.

Ramírez is currently the Senior Director of Innovation and Product Development at Northgate Gonzalez Markets. In his 34 years working for the Hispanic supermarket chain in California, he learned all aspects of the grocery business and is recognized as a respected leader in the food industry.

He began his career working in the deli/dairy section, climbing through the ranks to become a store manager, and then served as a buyer for the Hispanic supermarket chain. He also helped establish the marketing department.

“I think the most rewarding part of this journey has been getting to know not only the suppliers but a lot of other people and I consider them all my friends, even the competition because we all do our jobs and we are all friends,” Ramírez said.

After graduating with a degree in business administration from Pepperdine University, Ramírez earned his master’s degree, also in Pepperdine, always with the support of Northgate Gonzalez Market.

Don Miguel Gonzalez, the co-founder of Northgate Gonzalez Market, reacted to the appointment by congratulating Lupillo, wishing him “the best of luck in this new responsibility.”

Regarding his appointment as president of the LFIA, Ramírez said that “when I do something, the first ingredient I put in it is passion. With the experience I have and the friends I have in the industry, I know I can make a difference. I believe in the LFIA, and I think there is a need because there is no national organization that unites us, and therefore we have an excellent opportunity to represent Hispanics in this industry.”

This year, as president of the LFIA, Ramírez will focus on increasing awareness of the association’s presence, listening to the needs of those working in the industry, and offering the resources they have to guide and support small and medium-sized Hispanic businesses properly.

“For the Hispanic Retail Chamber of Commerce (HRCC), this is a critical and successful appointment. Lupillo is synonymous with Hispanic Retail, with over 30 years of experience,” said Julio Ibañez, president of the HRCC.