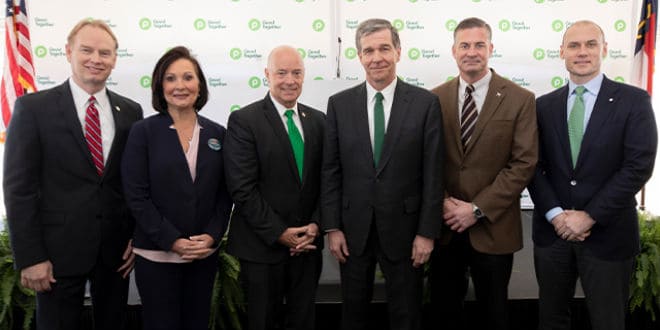 Publix Supermarkets held the groundbreaking ceremony of its new 940,000 square feet refrigerated distribution center in Greensboro, North Carolina. The facility will cost between $300 and $400 million and is expected to be completed by the end of 2022.

Publix’s new refrigerated distribution center is located east of Greensboro, on U.S. 70 at Birch Creek Road. It will create 1,000 new jobs by 2025, according to the supermarket chain based in Lakeland, Florida.

In addition to spurring economic growth across the state, phase one of the project will support the more efficient delivery of refrigerated products to Publix locations in the Carolinas and Virginia.

“The Greensboro distribution center will play a key role in supporting our growth in the region,” Jones said. “The hundreds of new associates who join the Publix family will help us provide the premier service our customers have come to expect.”

Upon completion, the new distribution center will include a refrigerated warehouse, a return center, fleet maintenance building, dispatch, and security post, according to Gray, the construction company in charge of the project.

“We appreciate Publix choosing to grow jobs and put down stronger roots in Guilford County and the Piedmont Triad with this new distribution facility,” Cooper said. “North Carolina will continue to strengthen our workforce to attract more good jobs here in our state.”

The distribution center project involves moving 2.2 million cubic yards of dirt and over 100,000 cubic yards of rock. A concrete duct bank for on-site utilities is being constructed that exceeds 25,000 linear feet as well as storm, sanitary, fire, and domestic piping over 83,000 linear feet. More than 2,500 tons of steel will be used in the build. At peak construction, more than 250 workers are expected to be on site.

In keeping with its culture of giving back, Publix also presented donations to two local nonprofit organizations during the groundbreaking ceremony. BackPack Beginnings and Second Harvest Food Bank of Northwest North Carolina each received $2,500 in support of their programs to help alleviate hunger by providing children with backpacks of food.

“Publix believes in being engaged in our communities,” said Publix Director of Communications Maria Brous. “As a food retailer, we are focused on alleviating hunger in the communities we serve and are proud to support organizations providing food to those in need.”