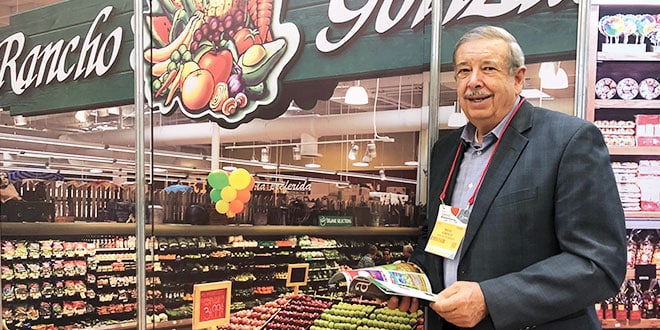 What today is a powerful chain of Hispanic supermarket with 41 stores in California, started in Anaheim in January 1980 when Don Miguel González Sr., with his older son, don Miguel Gonzalez Reynoso, opened his first grocery store with the hope to bring that nostalgia for the products from their country to his fellow Mexican countrymen.

“We started working based on the needs that we felt in the Hispanic community. We started looking for those unique products that did not represent a big sale in themselves, but that were a way to mitigate that absence from our land,” the co-founder of supermarket chain Northgate Gonzalez Markets told Abasto.

“We have worked hard, we have tried to make the market represent that, so that when they get there, Hispanics feel they are in their own country,” said Miguel González Reynoso.

Don Miguel spoke with Abasto Magazine during his visit to the Expo Antad & Alimentaria in Guadalajara, Mexico, which took place at the beginning of last March.

Expressing great humility, Don Miguel remembered the start of the business and how it grew from a small grocery store to a well-known and respected supermarket chain, which has always had the clear message of supporting Hispanics and being a job source for them.

“In reality, the need we had for the family was how to create jobs for all of us to work, it started with that, with a family need and from there we saw that there was the possibility of growing. I remember that about six months after we opened the first supermarket, a civilian interviewed me and asked me what my dream was and I told him that it was to have a store for each brother, so we each had a place to do what we wanted… We are 13 brothers, eight men and five women in the family,” said Don Miguel.

And in a relatively short time, Northgate Gonzalez Markets grew to having their first 13 supermarkets in California, fulfilling Don Miguel’s dream. According to the founding partner, seeing that the chain of stores had the opportunity to continue expanding, he followed the wise recommendations of his father to not to risk what they had already achieved and should have controlled growth.

Although they faced many obstacles and difficulties during their 38 years of bringing Northgate Gonzalez Markets to life, don Miguel highlights that “the satisfactions are greater. The greater the challenge, the greater the satisfaction, the fact that we are able to continue working as a family after 38 years and now having 35 of the second generation within the company, is a very great satisfaction.”

For him, it is also a pride to represent the Hispanic community in the US and show the world that they can do things just as well as any other big company.

In this sense, don Miguel has plenty of confidence in the capacity of the new generation of his family to continue innovation with the latest technologies, allowing Northgate Gonzalez Markets to be on the same level as other supermarket chains.

“What was good five years ago is not good anymore, that’s why we are betting a lot on technology. We started to develop a Click and Collect system that we have in only one store until we improve it. But you can order from your phone, if you want to pay right there with your card you can, or pay at the supermarket where we have the purchase ready. This is the first step, the next is how to have those sales online,” said the oldest of the Gonzalez brothers.

Don Miguel has a solid optimism in the future of his supermarket chain and of Hispanic businesses in general and his message for entrepreneurs is simple and clear: “I believe that opportunities are never going to end and there may be giant ones and there may be little ones. The opportunities continue, you have to be renewing yourself, do not sit down because you think what you did is enough, it does not work like that. We have to keep seeing new ways of doing business, opportunities will continue for people who are entrepreneurs, who want to work very hard and with a big mentality and heart.”