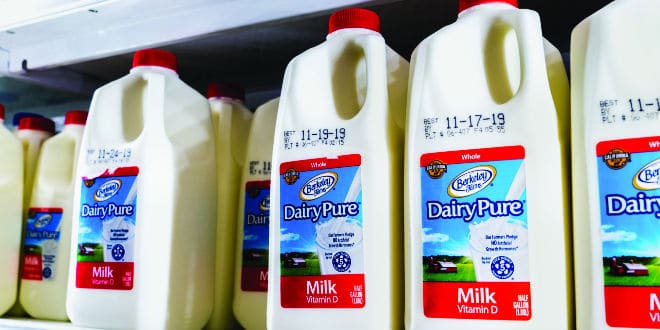 As someone who spent the better part of her career in the dairy aisle working for both a juice manufacturer and the USDA dairy farmer checkoff program, I am often asked my opinion about the recent bankruptcy announcement by Dean Foods.

My immediate response to this question is, “I’m not surprised. It was only a matter of time.” For those of you who regularly read my column, you know I often write about the commoditization and lack of innovation in the dairy industry.

For decades, milk held an excellent position, with 98% household penetration. It had a place in nearly every household’s refrigerator. Because it was such a staple, shoppers closely watched retail prices to scoop up a good deal.

Because of this, many grocery retailers began to use milk as a “loss leader” to draw traffic to their stores in hopes shoppers would fill their entire shopping baskets at their stores.

With a low-profit margin business, there was little room to invest in product research and innovation, which was necessary to fulfill changing consumer demands.

Processing plants are most efficient when processing one-gallon plastic jugs of milk. But with a changing consumer who was looking for alternative beverages that provided added nutrients, vitamins, satiety, protein, and sustainability, milk processors were unable to invest not only in the needed consumer research but also in renewing the equipment to produce what consumers desired.

The private label is an excellent strategy for many categories. Still, one in which there is 98% household penetration, it could be argued, it was a move that was detrimental to the category in many ways. Ultimately the consumer was impacted because processors were not able to invest in creating new and innovative products for consumers.

Retailers place their private label business up for bid with processors, and the competition is fierce, frequently resulting in razor-thin margins for the processors to gain the volume from a bid contract to keep production lines running as efficiently as possible.

I recently had an opportunity to speak with a former Dean Foods’ executive who confirmed much of what I have written here and in previous columns. These are the  three main factors which impacted Dean Foods:

Competition from other beverage categories-water is the biggest competitor to milk, but different categories have emerged, which didn’t even exist 5-10 years ago: energy drinks, cold brew coffee, smoothies, etc.

The price differential between a brand and private label milk. Processors need to rely on and believe in, syndicated data which will provide direction for the price point at which consumers will “buy up” to branded milk. When this price differential becomes too high, they will switch to private label which can provide a healthier margin to the retailer, but the loss is to the processor who will not have the profit to invest in innovation which will continue to drive consumers to other beverage categories

Loss of private label contracts. When 80% of a processor’s business is tied to private-label agreements, the loss of one customer has a significant impact on the overall market. One large mass merchant opened their milk processing plant, which had a substantial effect on Dean’s since Dean’s was a major private label supplier to this retailer.

I believe Dean Foods’ exit is just the beginning. It’s only a matter of time before the factors listed above will impact others.

We need to bring profitability back to the dairy category to invest in innovation and give consumers the products for which they are looking. Believe in the data, invest in research, and innovate for the future.