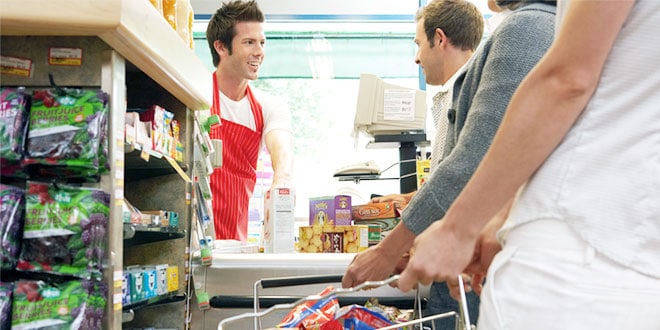 Some too much and some nothing at all. This is a well-known saying for almost every aspect of life that may occur to us. Since we are retail, it has always struck me that neighboring stores with apparent similarities enjoy very different luck, as far as customer favor is concerned.

I recently moved into another house and the supermarkets close to me form an important role on a day to day basis; buying fruits and vegetables, bread, butter, etc.

There are two supermarkets that are practically corner to corner of each other and in appearance target the same customer audience. One of them always has a busy atmosphere and is continually filled with customers in all its corridors, while the other doesn’t even pick up on distracted customers.

Our parents and grandparents always taught us that road restaurants where the most trucks were parked at always had the best food. Following that example, the first day I had to grocery shop for the house, I went into the supermarket with the most customers.

My experience was a good one not only the first day, but all the ones that followed.

After going several times in the successful supermarket and passing the one that had hardly any customer traffic, I was filled with the idea that as a customer I had been behaving in an “unfair” way because I had not given an opportunity to the other supermarket. One night when I was coming home from work, I decided to give the “bad” supermarket a chance.

Bad service is the worst thing for a customer

When I entered, I was surprised at the instant bad smells I detected (rotten food, burned bread, strong toilet smell).

In the meat area, two employees talked amongst themselves, taking longer than two minutes to attend me. It seemed they weren’t used to customers coming in and deciding to stay.

I continued my walk around the store, meanwhile hearing voices from inside the warehouse laughing and arguing. It appeared there was more movement and “fun” in the cellar then in the sales area of the store.

The employee found in the bakery section was found “texting” on her cellphone the entire time without even lifting her head to attend me.

When I told her I needed her help, only then did she detect the annoyance in my voice over her cellular conversation. Not only that, but instead of charging me for a traditional baguette, she mistakenly charged me for bread.

Apparently, I came at a bad time for her due to her important conversation on social media.

Our parents and grandparents were absolutely right! We should go where there’s more people and if they are truckers, even better!

This story is a real life example that can be used in any store and the proof that shows why clients prefer one place to another.

Unfortunately for this supermarket, if they do not make a radical change, they won’t survive more than 6 or 12 months.