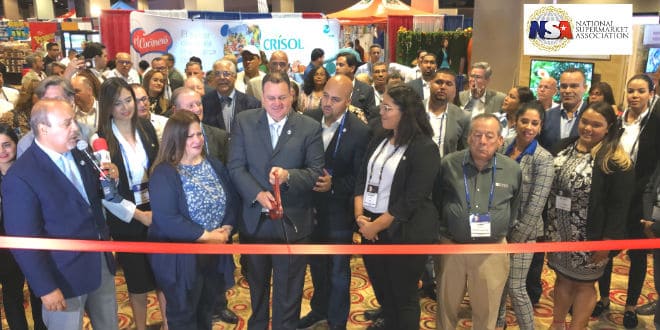 The National Supermarket Association held in New York its NSA Show 2019 with a new executive director, premiering a new exhibition floor layout, promoting Dominican products under the agreement “Marca País” and recognizing Goya Foods as the Company of the Year.

The NSA Show 2019 was held on August 28 at the Resorts World Casino in New York, with nearly 300 local and international businesses attending the show. More than one thousand visitors walked the one day show to do business and learn about new food trends and offers that are in the market.

Just a month ago, in July, Elizabeth Peralta officially took her new role as NSA Executive Director. Since then, NSA’s president, William Rodríguez, entrusted her with the mission to create a new dynamic for the 2019 NSA Show.

“William Rodriguez has guided me with great words of advice, gave me wisdom and then he gave me freedom to work organizing the show and look what we achieved, probably the biggest show in our history, I know that we are already breaking records,” Peralta said in an interview with Abasto.

Amid a festive atmosphere, with the sound of Latin music in the background, the aisles of the NSA Show 2019 exhibition hall were filled with merchants and business owners of Hispanic independent supermarkets in the New York area in search of offers and good business.

As every year, the association named the Company of the Year and in the NSA Show 2019 they announced that Goya Foods has won the recognition and also got the title of the best stand of the trade show.

“We believe that this recognition by the NSA is a recognition of our relationship with our customers, with our consumers and especially about what we do on a social level. From last year we have donated more than 300 thousand tons of products in the United States to help low-income communities. It is a recognition of brand, effort and tradition,” said Jesús A. Rodríguez, Goya’s Head of Sales.

NSA’s president, William Rodríguez, in a message to the attendees, highlighted the presence of “Marca País” pavilion from the Dominican Republic, the Dominican consul in New York, Carlos Castillo and the support of Marcos De León, director of the CEI-RD, and Osmar Benítez, Dominican Ministry of Agriculture.

Related Article: The NSA Strengthens Relationship With The Dominican Government

“It is already a reality that our products are on the shelves of supermarkets that are members of the NSA and we will be very aggressive giving all the necessary help to Dominican producers and exporters and Dominican consumers, since our diaspora is the largest that exists here in New York, reaching almost one million 350 thousand inhabitants in this area,” said Consul Castillo.

On the other hand, Lesbia Brea, director of exports of the Export and Investment Center of the Dominican Republic (CEI-RD) told Abasto that 17 Dominican companies participated in the “Marca País” pavilion, offering a wide variety of products from the agricultural and industrial sectors.

The CEI-RD official highlighted the support of the NSA and the growth of exports to the United States thanks to the advice they offer to entrepreneurs looking to market their products.

Associated Supermarket Group participated in the 2019 NSA trade show debuting its new corporate campaign, #ASGNewReality.  At the NSA trade show, ASG showcased its solutions for independently owned and operated stores to take advantage of the economies of scale normally available only to larger supermarket chains.

ASG’s footprint previewed its new corporate website, brought-to-life its family of banner and house brands, and showed the technology used for distribution, marketing, merchandising and promotional services. “We congratulate the National Supermarket Association for a successful trade show and commend their efforts to provide a platform for independent store owners to experience the best in class in our industry,” said Zulema Wiscovitch, Chief Administrative Officer of Associated Supermarket Group.

Likewise, the NSA Show 2019 was attended by numerous companies that for the first time participated in the trade show. One of them was Nixie’s, which also made the official launch of its coffee.

“We are fortunate to be able to be here presenting our new product and we have done very well, this is the show where you want to participate,” said Nixie Espinal-Díaz, who, with her husband Rafael Díaz, started their Nixie’s coffee production company.

Both small and large and long-standing companies such as GraceKennedy-La Fe recognize the value of participating in the 2019 NSA Show.

“It is tremendously important to always have contact with independent businesses that really are the heart of our business. These shows allow us to have an approach with the stores and understand what their needs are, so that from the perspective of innovation, we can give them what they are looking for,” said Andrés Falquez, Category Marketing Director at GraceKennedy Foods USA-La Fe.

Photo Gallery of the Trade Show