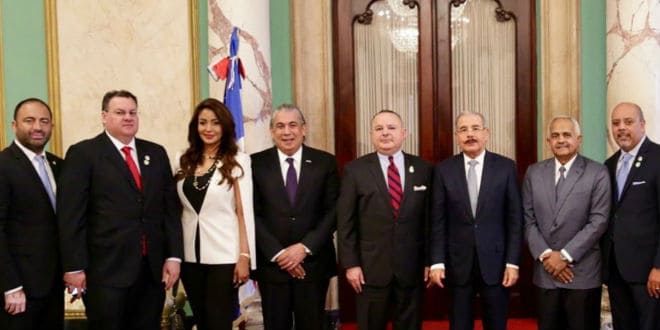 Executives of the National Supermarket Association (NSA) met in Santo Domingo with the President of the Dominican Republic Danilo Medina to ratify the launch of the Marca País campaign, following the agreement signed with the Dominican Consul General in New York.

The trip to the Caribbean country took place in early May, where NSA representatives also participated in the 2019 International Food, Tobacco and Beverage Fair organized by the Dominican government and the private agricultural sector.

In an interview with Abasto Magazine, NSA President William Rodriguez said that during their participation in the food fair they had the opportunity to meet a wide variety of high-quality Dominican products and exchanged ideas for the distribution of them in the United States.

Photos of the meeting in the office of the president of the Dominican Republic, Danilo Medina, with the directors of the NSA and at the Feria Agroalimentaria. Photos courtesy NSA.

Rodriguez said they are having conversations with US customs authorities to have inspectors in the Dominican Republic to carry out pre-inspections of the products to be exported in the Caribbean country and expedite the procedures.

After participating in the trade fair, the NSA board of director group met with President Medina at the government palace, with whom they discussed the agreement they signed with the Dominican consul in New York to launch the Marca País project.

“One of the things he said is that he loves the deal because we are finally doing business with the Dominican Republic and that it is a tangible project, he gave us all his support,” Rodriguez said.

At the NSA trade fair that will take place on August 28, they will have a pavilion dedicated to the Marca País, where they will present a large number of Dominican products and brands looking to be marketed in supermarkets in the New York area.

The National Supermarket Association has more than 400 independent supermarkets, mostly Hispanic, located on the east coast of the United States, mainly in the tri-state area of ​​New York and a chapter in Florida.