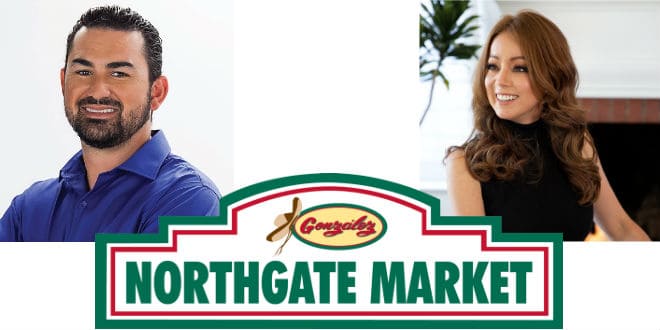 Northgate González Market announced a partnership with renowned chef Marcela Valladolid and former Major League Baseball player, “Titan” Adrián González, to launch the campaign “Every Visit Has a Story”. The two personalities will be sharing their love for food and their experiences when they go shopping at the Southern California premiere Latino grocery store.

Both personalities will be wielding their social media influence, telling how they turn to Northgate Market for every day shopping needs and special occasions throughout the year. Through videos, photographs, and personal stories, the two social influencers will help promote the shopping experience at the Hispanic supermarket chain.

“At Northgate Market, we’re thrilled to bring on board both Chef Marcela Valladolid and former Dodger Adrián González as ambassadors to our grocery store. We’re proud of our fresh, quality offerings and know their personalities and experiences will resonate beautifully with our customers,” said Co-CEO of Northgate Market Miguel González.

Growing up around expert and traditional cooks in Tijuana, Mexico, Marcela was raised to be passionate about food. She enrolled full time in the Los Angeles Culinary Institute and trained in Paris where she graduated as a classically trained pastry chef at the Ritz-Escoffier Cooking School.

She successfully translated her culinary knowledge and passion as host of her own Food Network series, “Mexican Made Easy,” which premiered in 2010. She was also a co-host on the Emmy Nominated show “The Kitchen” and a celebrity judge for 3 seasons on “Best Baker in America.” Marcela published “Fresh Mexico: 100 Simple Recipes for True Mexican Flavor” in 2009, “Mexican Made Easy” in 2011. Most recently, Marcela published Casa Marcela” in 2017 & “Fiestas: Tidbits, Margaritas & More” in 2019 which were both listed as national best sellers.

“Food is the way I connect to my México upbringing and the way I keep traditions and culture alive not only to nurture my soul but to pass them down to my children and, in the further, them to theirs,” said Chef Marcela Valladolid. “The only way I can do that is to replicate, to the best of my abilities, the foods that I ate growing up in México. Northgate has been instrumental in that process of preservation because I can find those ingredients to create those dishes at their markets.”

The chef continued, “Walking the aisles at Northgate takes me and my five senses back to Tijuana. I feel connected and empowered to continue to cook and celebrate the foods of my home country. My partnership with them is real! Me and my youngest, Anna, will stroll down the aisles, her with a Concha in hand. Northgate is already very much a part of our lives!”

Adrián González is a former Major League Baseball player. He was born in the United States, but was raised in Tijuana, Baja California, México, until 1990. González was the first overall pick in the 2000 MLB draft by the Florida Marlins. He was traded to the Texas Rangers and made his MLB debut with them in 2004. He also played for the San Diego Padres, Boston Red Sox, Los Angeles Dodgers and the New York Mets,  He was an All-Star selection three times and a two-time Gold Glove Award winner.

“When I am inside Northgate Market, I feel like I am back home. I am excited to partner with a trusted brand that can bring home to me!”, said González.

Keep an eye on their Instagram pages as they will be promoting recipes and ideas for Back to School, Mexican Independence Day, Hatch chile season, and of course, during the holiday season. Here are their social media channels: