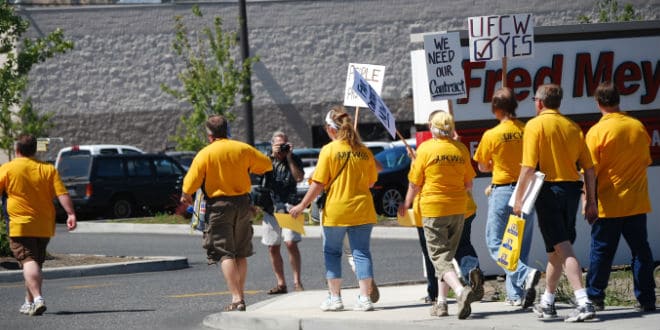 United Food and Commercial Workers Local 555 announced that grocery store workers across Oregon and SW Washington, have voted nearly unanimously to authorize a strike anywhere in the jurisdiction against Albertsons, Fred Meyer, QFC, and/or Safeway as part of a union effort to increase pressure for pay raises. The union have been negotiating new contracts for over a year without any agreement.

A strike authorization vote does not automatically trigger a strike; instead, it provides the Local 555 Unity Bargaining Team with the discretion to call for a strike anywhere in UFCW Local 555’s jurisdiction at any of the aforementioned stores whenever the Team should deem such action necessary, according to a press release.

UFCW Local 555 represents more than 20,000 grocery workers in the region. The next negotiation session between the Unity Bargaining Team and the employers’ negotiators will take place on August 29th. The two sides have been negotiating since June of 2018.

Kelley McAllister, communications director for UFCW Local 555, said it’s clear grocery workers across the region “overwhelmingly” support calling a strike if future negotiations with employers fall through, according to The Daily Astorian.

McAllister said Fred Meyer’s proposal for increases in wage rates are considerably smaller than what the union is looking for.

In a statement published on the company’s website, which reports on negotiations with the union, they ensure that Fred Meyer “will continue to bargain in good faith and want a balanced contract – one that rewards you with increases in your pay, maintains premium affordable health care and a pension for your retirement. A fair and balanced agreement with our associates is critical to the health and success of the company.”

“You can’t close a wage gap of this magnitude with a token contribution of a dime a year, period. And frankly, even the highest paid Schedule A workers aren’t making enough to make ends meet. We need a sea change in the perception of how much our grocery workers matter,” said Dan Clay, President of UFCW Local 555.

Jeffery Temple, director of corporate affairs for Fred Meyer Stores, Inc., sent an email to The Oregonian responding to the pay equity study. “The recent statements about an alleged pay gap based on gender between women and men working at Fred Meyer are simply not true, and we see them as an unfortunate misrepresentation of our associates.”