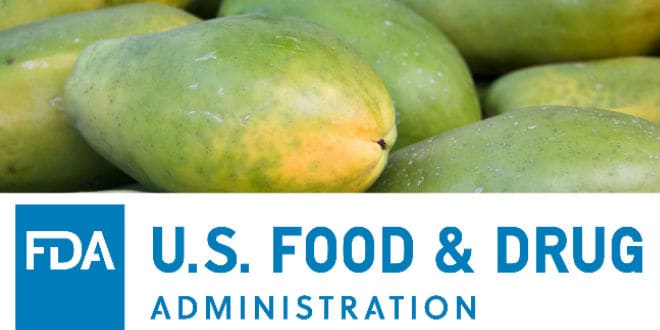 Since 2011, American consumers have been exposed to eight outbreaks caused by Salmonella serotypes linked to imported, fresh papaya. And, this June health authorities started an investigation into an outbreak of Salmonella Uganda illnesses tied to the consumption of whole, fresh papaya imported from Mexico. While the 2019 outbreak is ongoing, the first seven outbreaks accounted for almost 500 reported cases of illness, more than 100 hospitalizations, and two deaths.

The U.S. Food and Drug Administration wants this recurrent pattern of illness to stop. Acting FDA Commissioner Ned Sharpless, M.D., and Deputy Commissioner Frank Yiannas announced they issued a warning letter to a papaya importer, Agroson’s LLC, following an FDA investigation at the facility in conjunction with the current outbreak. This investigation uncovered significant violations of the Federal Food, Drug, and Cosmetic Act.

“We are urging growers, packers, shippers and retailers in the papaya industry to review their operations and make all necessary changes to strengthen public health safeguards”, said the FDA leaders.

In response to this most recent Salmonella Uganda outbreak, the FDA deployed an inspection team to the packing house and farm that was linked to the contaminated papayas via traceback and epidemiological evidence. The findings of those visits will be made public when their investigation is complete.

Related Article: Do Not Eat Papayas From Mexico, Warns the CDC

The FDA also increased sampling and screening of papayas at the border. In addition, the agency is actively collaborating with their counterparts in the Mexican government regarding this current outbreak through the agency’s Latin America Office to determine ways to further our collaborative prevention efforts.

“Our letter calls on the papaya industry to assess the factors that make their crops vulnerable to contamination. If a foodborne pathogen is identified in the crop or growing environment, a root cause analysis should be performed to determine the likely source of contamination. Procedures and practices that minimize that contamination must be implemented”, stressed Sharpless and Yiannas.

The FDA is also asking the papaya industry to examine the use and monitoring of water used to grow, spray (pesticides, fungicides), move, rinse or wax crops to identify and minimize risks from potential hazards. “All sectors of the industry should adopt tools and practices needed to enhance traceability since papayas are a perishable commodity, to more rapidly facilitate the tracking of involved product to expedite its removal from commerce, prevent additional consumer exposures, and properly focus any recall actions.”