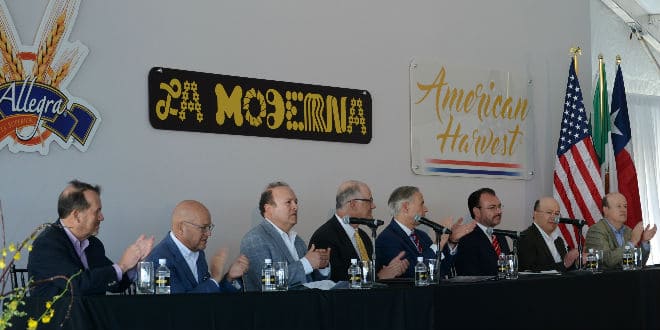 Top media members were invited to the inauguration ceremony, which featured remarks from Texas Governor Greg Abbott and other U.S. and Mexican business leaders, such as Mexico Secretary of Foreign Affairs Luis Videgaray Caso, Cleburne Mayor Scott Cain, La Moderna CEO José Carlos Franco Autrique, La Moderna Chairman of the Board Luis Miguel Monroy and representatives from the City of Fort Worth, among others.

“From the hard work of Mexican farmers all the way to a dinner table in Texas and all over the U.S., you can clearly see that when working together, Mexican and Texans, we can create wealth for our people and bring positive synergies that allow both sides to be more efficient in this ultra-competitive world. We live in a global village. In La Moderna, we work with people from different parts of the world…with core values aligned and good faith, we join forces every day to earn our living and deliver world class food to consumers. I have no doubt that in this new venture, the formula of cooperation will be the same,” La Moderna Chairman of the Board Luis Miguel Monroy said at the inauguration ceremony.

The new U.S. facility sits on 16.5 total acres, produces nearly 4,000 tons of pasta per month and has created 100 direct and 300 indirect new jobs for the city of Cleburne and greater Johnson County.

“We are so proud that you’ve chosen to come here to Cleburne, come to Texas, grow your company here and expand and sell your product across the entire United States of America,” Texas Governor Greg Abbott said at the ceremony.

Goya Forms an Alliance to Sell Its Products in Mexico

“I’ve had the opportunity to participate in countless groundbreakings, as well as openings of new facilities. I have never been as impressed as I am today,” Governor Abbott added.

Since its beginnings in the 1920s, La Moderna has quickly expanded into becoming the largest pasta company in Mexico. In 2017, the company registered $520 million in total sales and sold more than 570 million pounds of pasta products, with approximately 20% of sales coming from the U.S. market.