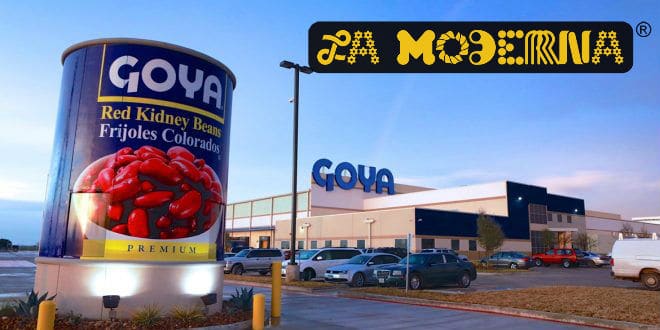 Starting in May, Goya Foods will begin marketing its food products in about 300 stores in Mexico with the support of La Moderna, after forming an alliance with this Mexican food company to achieve this goal.

Goya is America’s largest Hispanic-owned food company and has established itself as the leader in Latin American food and condiments. Goya manufactures, packages and distributes over 3,000 food products from the Caribbean, Mexico, Central America and South America.

“This is our great year because we will enter officially, in a correct and formal way, in Mexico. We are making an alliance with La Moderna and we are very excited because it is a huge market, we think we can provide unique culinary sensations,” said Robert Unanue, president of Goya Foods in a statement released in the Expo Antad & Alimentaria México 2018 news publication.

Unanue said that for years they have had a commercial alliance with La Moderna because they represent them in the United States with their product lines such as pasta and cookies and for several years they had the idea of ​​launching a line of Goya products in Mexico.

La Moderna, with a trajectory of almost 100 years, is one of the most important companies in Mexico and is part of the list of the 50 main industries of the entire Republic of Mexico. Currently, La Moderna is the most sold and consumed pasta in the country. According to the company, it is estimated that they have a 75% market share.

The president of Goya said that they found the right association with La Moderna and that alliance “pushed them to take the last step” to market their products in Mexico.

Healthy Food Traditions for the Family with Goya’s New Products

According to the statement, Goya will begin sales in Mexico with a varied, but limited line of products, “healthy, organic, low in sodium such as mixed rice with quinoa, organic quinuas, yellow box rice, canned organic beans, beans in can low in sodium, organic coconut water, among others.”

Unanue trusts that with these products they will be able to “conquer the Mexican palate, but also the foreigners who live in the country. In the United States we represent all the countries of Latin America, we hope in Mexico to also reach consumers from all over the world who are living here because the products are attractive for a Mexican as well as for a Venezuelan or any nationality.”

Goya Foods will begin marketing its products in about 300 stores in Mexico at the end of May, including Walmart and OXXO and other food distributors such as Soriana and Chedraui.