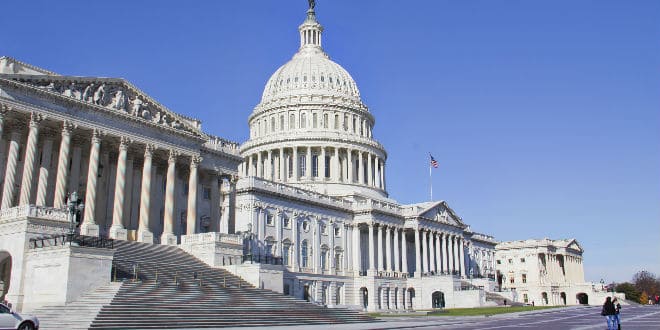 Retail members from the Food Marketing Institute (FMI) and the National Grocers Association (NGA), which include supermarket retailers, wholesalers, and food industry state association executives, had about 200 meetings with Members of Congress and their staff during “Day In Washington,” the annual supermarket industry fly-in.

Grocers and food industry executives advocated for bipartisan support on “Restoring Investment in Improvements Act” (H.R. 1869 and S. 803), the importance of tax rate reductions and making them permanent, as well as the need to make the payments marketplace more competitive and secure for consumers, merchants, issuing banks and the economy.

“The single most effective means for educating new and established congressional offices about challenges grocers face with payments and the crucial need for tax reform corrections is for our members to meet face to face with their representatives and directly relay their firsthand experiences,” stated Leslie G. Sarasin, FMI President and CEO. “Nothing compares to the power of grocers authentically sharing how policy decisions affect their business operations, their 4.8 million employees and their customers.”

The Tax Cuts and Jobs Act (TCJA) included a provision providing businesses with 100 percent bonus depreciation, which intended to allow them to write off the full costs of short-lived investments immediately.

FMI and NGA members advocating during “Day in Washington”

Congress intended to help retailers invest in their businesses by the inclusion of this provision; however, some categories of business investment, most notably retail, restaurant, and leasehold improvements together comprising a category called qualified improvement property, or “QIP,” were accidentally excluded from being eligible for 100 percent bonus depreciation due to a drafting error.

Because of this error, retailers making investments to improve the interiors of their stores now face a more restrictive cost recovery period — more than twice under the prior law – and do not qualify for the benefit intended by Congress.

The retail glitch has caused significant cash flow concerns and has prevented retailers from making important improvements to their stores, according to the National Grocers Association.

Related Article: The NGA Unites Leaders from the Supermarket Industry

“With a new Majority in Congress and important issues such as payment security and the retail glitch likely to come up for debate, it’s vital that Main Street grocers engage in the political process,” said Peter Larkin, President and CEO of NGA.

“I thank everyone who took time to leave their businesses and come to Washington, D.C., to take part in face-to-face conversations with their elected officials. By taking part in the legislative process, grocers can ensure their voices have been heard and their members of Congress have a better understanding of how their actions impact the bottom line,” added Larkin.

Lawmakers in the House and Senate have introduced bipartisan legislation to fix the so-called retail glitch, but action on making corrections to the 2017 tax law doesn’t appear to be imminent. Business groups say they want to increase the pressure on lawmakers to act quickly, reported The Hill.