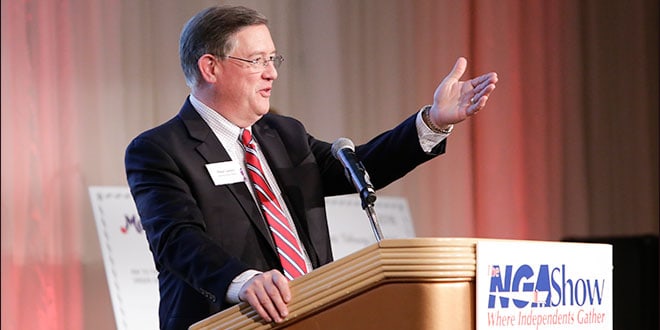 2018 began and for the independent supermarket industry, in the words of Peter J. Larkin, president of the National Grocers Association (NGA), the panorama appears “interesting.” It will be a year of challenges, fast changes motivated by technology, competition and of uncertainty due to the changes brought about by controversial laws such as tax reform.

The president of the NGA, a veteran in the supermarket industry and profound connoisseur of the legislative process in Washington, who leads an organization that represents the interests of more than 7,000 independent grocery stores, spoke with Abasto magazine about the industry that he represents, the situation of Hispanic supermarkets, the lack of Latin representation in the NGA directives and the surprises that the NGA Show will have this year, which takes place February in Las Vegas.

Abasto Magazine: What analysis can you present about the status of independent supermarkets at the end of 2017?

Peter J. Larkin: We live in interesting times. There’s no doubt that the supermarket industry is rapidly changing, either because of the growth of electronic commerce or the explosion of new formats that are competing for the same dollars and on top of that we have the changing consumer trends…The independent supermarkets have the ability to overcome obstacles and we have strong ties with communities and that is why we know what consumers want and need…I feel very optimistic about the state of independent supermarkets.

AM: What were the NGA’s main successes this year?

PL: At the beginning of the year (2017), we achieved a great victory in our work to protect the reform of debit transfer fees. This year there was an attempt to revoke that reform, but we managed to defend it successfully and avoided an increase in rates of more than 200%. We are currently in the debate on tax reform and we are very happy that both versions (the Senate and the House) are preserving the deduction of interest on expenses and advertising deductions. In addition, every Wednesday we have “webinars” on important issues that are happening in our industry. But, our greatest opportunity in education is offered every year at our Las Vegas Show where we have 40 workshops and general sessions where you can learn ideas that can be implemented the next day in your stores.

The Hispanic independent supermarkets and their role in the NGA

AM: Of all the NGA members, how many affiliates are Hispanic supermarkets?

PL: I don’t have a specific number and I think that we try to find that number, we’d have to look in two ways: one, if the owners are Hispanic and serve the Hispanic community or if our members have Hispanic formatted stores because they serve this community due to the geographical area where they are located.

AM: According to your experience, is it possible that independent Hispanic supermarkets face more challenges to maintain and grow than the other independent grocery stores and what would be the reasons?

PL: Actually, I see many of them very successful and probably in areas where traditional stores are having problems. With the demographic change, the owners and operators of Hispanic supermarkets probably have the advantage of serving a community that they understand in terms of food, culture and what buyers like. I have great respect for Hispanic supermarkets and I think the future for them is promising.

AM: Do you think that there is representation that reflects the diversity of independent supermarkets in the NGA directives?

PL: No, no I don’t think so. In fact, just over a year ago we established a diversity team to review the structure of our board of directors and who is serving on our board and we concluded that it does not reflect the industry that we attend, so we started to improve in that area…It will take time, but we are going in the right direction and we hope that in the next two years, you will see that the leadership of our board will be more diverse.

AM: Next February, the NGA celebrates its show in February. Why is it important for an independent supermarket to attend this event?

PL: I don’t think a better place exists for an independent supermarket operator to learn and understand industry trends. They will see these trends in the show, they will learn how other businesses respond to these trends through our education and networking events. They will also be able to meet new and innovative products in the exhibition area. We should not underestimate the importance of having together 3,500 people from the same industry who may have the opportunity to be face to face sharing new ideas. This is invigorating.

AM: The NGA show offers 40 specialized educational workshops. Of all of these, could you recommend some that stand out?

PL: We have a complete series about technology and trends, such as electronic commerce. There is plenty of technology that can be used to reduce costs in the system and if you think about those terms, I think those are the two most important. One of the things I hear the most when I travel around the country is the difficulties in recruiting, training and maintaining the work force. That’s why we will have a series of workshops that we call Personnel Development and if you are really interested in increasing the categories of fresh products, we create ideas in marketing and commercialization in the perimeter departments because it is becoming more and more important. It is very difficult to recommend a particular workshop, it really depends on what you need as a store operator.

AM: The main speaker of the event is General Michael Hayden, former director of the CIA and the NSA, a very recognized and very interesting character. However, some might ask, what kind of message can a high-ranking military man offer that led the secret world of US espionage to a show of independent supermarkets?

PL: We are going to have a lot of information available about the industry during the show, therefore it doesn’t hurt to take a step back to listen to a very interesting and recognized speaker who is going to talk about what is happening in the world, how the nation is facing the political, economic and security issues that have an impact on all people and businesses.