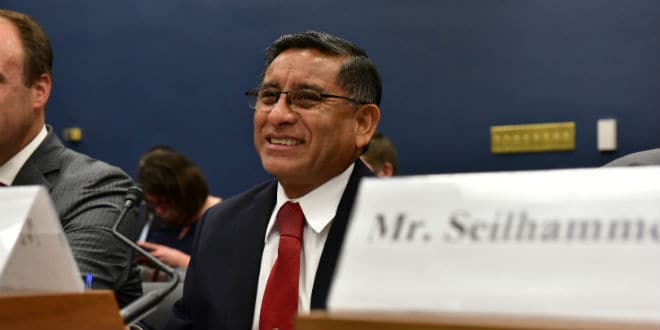 The owner of Todos Supermarket in Woodbridge, Virgina, Carlos Castro, testified before a House Committee on the difficulties facing independent supermarkets because of the overwhelming number of regulations that prevent small businesses from growing.

At the hearing, Castro emphasized how a growing number of regulations are forcing supermarkets to reallocate resources that were previously used for store improvements, additional hiring of staff, and greater offers.

Castro explained that the average independent grocer spends between $40,000-50,000 annually on regulatory compliance, while operating with a profit margin of 1 to 2%, according to a NGA member survey.

“Costly regulations often take up too much of our time and resources, and pose as a serious barrier to hiring new talent,” Castro said in his testimony.

The Salvadoran businessman told lawmakers that forty to fifty thousand dollars may not sound significant in Washington, but for an independent grocer, that can be enough to put a struggling grocer out of business, or prevent a competitive grocer from hiring new workers or renovating existing operations in order to keep pace with the competition.

The message from the owner of Todos Supermarket

“At Todos, we often say ‘if you have a good attitude and work hard, there is no limit to how high you can rise,’ with business, it should be the same,” said the owner of the Hispanic supermarket. “I would ask our elected representatives to continue looking for opportunities to unshackle businesses from their heavy regulatory burden, and let businesses like mine see how high we can go.”

Todos Supermarket was founded in 1990 to meet the needs of an increasingly diverse customer base in Woodbridge, Virginia.

Peter J. Larkin, president and CEO of the NGA, commented that “Locally owned independent supermarkets should be focusing on the customers they serve and growing their business, not worrying about the next regulation coming from Washington.” He added that “With grocers operating in such a fiercely-competitive marketplace, it’s crucial that Congress help – not handcuff – small businesses like Todos Supermarket.”