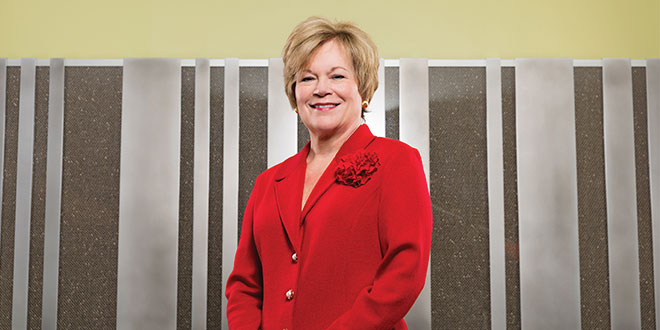 Interview with Leslie Sarasin, President and CEO of the Food Marketing Institute

In recognition of the increasingly influential presence of Hispanics in the food industry in the United States and for National Hispanic Heritage Month, which is celebrated from September 15 to October 15, Abasto interviewed Leslie Sarasin, executive director of the Food Marketing Institute (FMI), about her relationship with the Hispanic community and her vision of the growth of Latino businesses in the powerful and competitive world of the food industry.

Years ago, when Leslie Sarasin was a student in College, she went to Mexico to perfect her Spanish. She had the opportunity to live with a family that helped her understand Hispanic customs and their rich culture.

The executive director and president of the Food Marketing Institute (FMI)) still defends herself speaking Spanish and the experience lived in the neighboring country has allowed her to appreciate the celebration of Heritage Month even more.

In November, Sarasin celebrates ten years leading one of the most influential organizations in the food industry in the United States.

She considers her affection for the Hispanic culture and her passion for this industry to be a perfect complement, “because one of the things that I learned while living in Mexico was how important food is in their culture and particularly how the family joins in the celebrations. That’s why I think it makes sense for the grocery industry to celebrate Hispanic culture throughout the year, but especially during Hispanic Heritage Month,” said the executive.

The Food Marketing Institute was created in 1977. Its main members are retailers and wholesalers and represent various companies providing products and services for the food sector.

About 1,000 companies are members of the non-profit entity in the US, as well as 500 supplier companies and some 100 companies that operate abroad.

All of these companies represent a total of 33,000 stores and 12,000 pharmacies that employ 5 million workers and generate $800,000 million in sales, Sarasin said.

Abasto Magazine: How does the FMI establish a connection with Hispanics to honor the Hispanic heritage in the United States?

Leslie Sarasin: During the last five or six years in the FMI, we have worked during National Family Meals Month with the idea that families that eat together more often are healthier families.

Not only in the context of eating habits but also in their social behavior, so their children have fewer absences in schools, fewer incidents of drug abuse or alcohol consumption and have better grades in their studies.

We at the FMI consider the National Month of Family Meals, which also takes place in September, a very important part of US culture.

LS: In the early days of my career, there was much less intersection between the Hispanic food community and national organizations, but that is changing drastically.

As demographics change in the country there are substantial opportunities for our retail members to reconsider their business associations and strategies, especially not only the growing Hispanic population in the US, but also their change so that Hispanic power is much more prevalent in the US.

Even people in the United States who are not Hispanic and who were not necessarily associated with Hispanic food are now attracted to it, creating opportunities in the food retail sector to unite those things more easily.

Thinking about the way Hispanic grocery stores and those that are more traditional in the US can incorporate the new tastes we have in this country for Hispanic food, we are supporting a program related to the diversity of suppliers.

We work closely with all of our retail members, both Hispanic and non-Hispanic, to help them identify ways to diversify their sources and the types of suppliers they use for the products they sell in their stores.

We found that as companies support supplier diversity, their customers really appreciate the fact that they can access different types of products in a way that they previously could not.

I believe that this role of the Hispanic store owner and the growing focus on Hispanic food is something we have to spend a lot of time on because we must think about how we can build our workforce, give them the opportunity for leadership and progress and really bring the Hispanic culture to a leading role within our retail operation.

AM: Do you think the language is a barrier for Hispanic store owners looking to make progress in the food industry?

LS: I do not think so, it seems to me that sometimes it can be a bigger challenge, but I do not think the language is a barrier because more and more people in the United States who did not grow up in a Hispanic environment are learning to speak Spanish … And a large majority of the Hispanic population recognizes the need to speak English.

AM: A fundamental part of the grocery industry is community outreach and that is why the FMI created the Community Outreach Awards. Are Hispanic stores being recognized?

LS: Grocery stores have always been fundamental pillars in their communities, reflecting the values, demographics and culture of the neighborhood they serve.

This recognition program is part of the FMI’s efforts to honor companies that are doing a good job in the community and serve as an example for other stores to also do something positive in their neighborhoods. Last year, one of the winners in this category was the Northgate Gonzalez supermarket in Southern California.

Consumers prefer to buy groceries in stores instead of online

AM: The grocery industry is constantly evolving and now faces major upheavals due to advances in electronic commerce. How do you see this transformation?

LS: From my perspective, I think that this is a significant alteration, but it seems to me that there are opportunities within this disorder.

Technology can improve the experience for both the buyer and the retailer, if we can overcome fears and begin to think more clearly about the buyer we want to target.

AM: Are supermarkets and independent bodegas, many of them owned by Hispanics and other minorities, in danger of not surviving these costly technology-driven changes?

LS: I think that there are dangers, but that also think that the small operators are much more versatile and can make decisions quickly and make quick changes… It seems to me that the independent Hispanic stores, the wineries, have better opportunities than the big chains to create those experiences that clients are looking for.

AM: What position does the FMI have before the renegotiation of the North American Free Trade Agreement (NAFTA) and the commercial war caused by the imposition of tariffs?

LS: We spend a lot of time advocating on behalf of the industry, we conduct many studies and investigations with our companies to better understand the impact of a wide variety of public policy proposals and trade agreements, how those agreements can affect the business operations of our retailers and wholesalers, as well as our supplier companies.

We recently conducted a study together with the National Retail Federation and the Retail Industry Leaders Association to explore what NAFTA means for retailers and their customers.

What I think is clear to the retail sector is that the impact depends a lot on what type of retailer it is, what kind of products it sells and where it is supplied.

The renegotiation of NAFTA will affect a large group of our members in a different way. We are working very closely with companies to see how we can help them better, while they try to make sure that they will continue to have access to the type of products their customers want at prices they can afford.

I am very hopeful that we will achieve a good renegotiation because since the presidential elections took place in Mexico, there is a lot of interest in trying to finalize the negotiations and that everything be solved before the new president assumes his post in Mexico.