Home » News » The NGA Unites Leaders from the Supermarket Industry 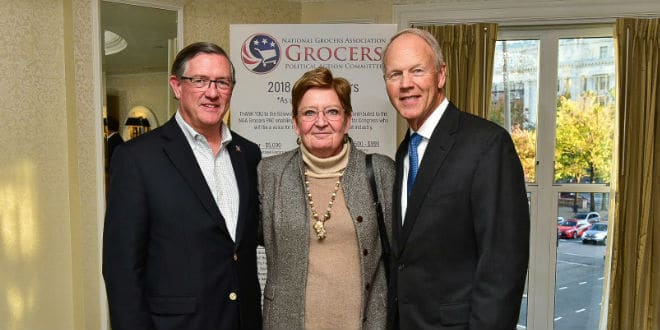 The event began with an afternoon welcome reception from 6 pm to 7 pm and was followed by a Board of Directors Dinner. The two-day event, which continues until Friday October 26, will feature various educational sessions and time for networking. The educational sessions will focus on a number of key areas that independent grocers and their trading partners are currently facing and future issues likely to impact their business, according to the NGA Summit website.

The event will also have Trading Partners Live, which are 20-minute B2B sessions to connect independent retailers and wholesalers with manufacturers and service suppliers that must be scheduled in advance.

Among the industry leaders attending the summit was Don Nickles, chairman and CEO of The Nickles Group, a firm he founded in 2005 after serving in the U.S. Senate for 24 years and Jade West, Senior VP for Government Relations at the National Association of Wholesaler-Distributors (NAW) and former staff Director of the U.S. Senate Republican Policy Committee.

NGA’s Independent Impact Summit is meant to bring together decision-makers and business leaders from across the supermarket industry to discuss industry trends and ways to collaborate to drive mutual business programs and profitability, according to the NGA.

CART and The NGA Show Partner to Bring Retail Innovation

“The previous Fall Leadership conference was the latest success in our NGA journey. The event was filled with key decision makers, thought leaders and the top service providers in the industry. The presentations were very topical and between the one-on-one meetings and the social events which encourage open dialogue we had both the time to sell and the opportunity to learn,” said Brian Moyer, CEO of Freshop, according to the NGA’s website.

The NGA is the national trade association representing the retail and wholesale grocers that comprise the independent sector of the food distribution industry. The association’s mission is to ensure independent, community-focused retailers and wholesalers the opportunity to succeed and better serve the consumer through its policies, advocacy, programs and services.