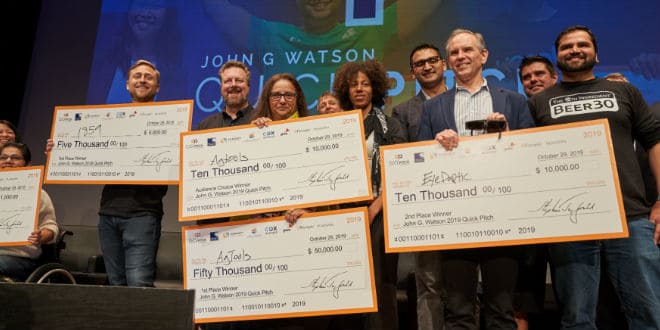 Martha Montoya, founder & CEO of AgTools, took just two minutes to persuade a judging panel and an audience of 600 people, that her company is a promising business venture and won the John G. Watson Quick Pitch Competition in San Diego.

AgTools won the $50,000 first prize and an additional $10,000 for being awarded the audience’s favorite. The founders of 10 biotech and tech startups from Southern California selected from almost 300 applications competed in the annual event sponsored by Tech Coast Angels, Connect w / SDVG, Cox Business, the John G. Watson Foundation, and PeakSpan Capital.

The ten finalists presented their quick speech to the judges, but they also shared their concepts with an auditorium of 600 people made up of the investment community, entrepreneurs, and San Diego influencers who packed the Qualcomm Hall.

“We had the opportunity to work with a mentor, an investor who teaches you what is important in the world of finance, about the business and how to make the presentation in two minutes. That was the first success,” Montoya said in an interview with Abasto.

In those two minutes, she explained what AgTools is, what it does, and how it is creating a positive impact on the food industry, with the message that food waste is a problem that concerns everyone.

AgTools provides monthly real-time software service and connectivity between farmers and other companies in the agricultural sector, which helps them make decisions.

Related Article: Hispanic Impact and Insights on the Fruit and Vegetable Industry in the U.S.

“The number one problem is that we are throwing away a lot of food while many people are going to sleep hungry, this is not logical. Every day in the U.S., we are dumping  4,900 trucks loaded with fruits and vegetables. In the presentation, we offered solutions to avoid wasting food with data transparency throughout the supply chain,” said Montoya.

In the second place, winning $10,000 was Laguna Beach-based, Eyedaptic, Inc., creators of software that help simulate natural vision for those suffering from macular degeneration. Third place and $5,000 recipient was 1859, Inc., a San Diego-based biotech startup that replaces large facilities used for medicine with a single benchtop instrument.

“The goal of Quick Pitch is to be bigger and better every year and create momentum beyond the event for our finalists. This year’s unprecedented performance by AgTools winning both 1st prize and the Audience Choice award is a signal of a break-out company in the making! Tech Coast Angels is already considering several Quick Pitch companies for investment,” said Victoria Lakers, Tech Coast Angels member, and Quick Pitch Chair.

Montoya said that she also feels proud that her company,  founded in 2017, is made up of a team of Hispanic technicians. She said that the $60,000 prize won by AGTools would be invested in technical support for its current clients, also in new tools development and marketing.