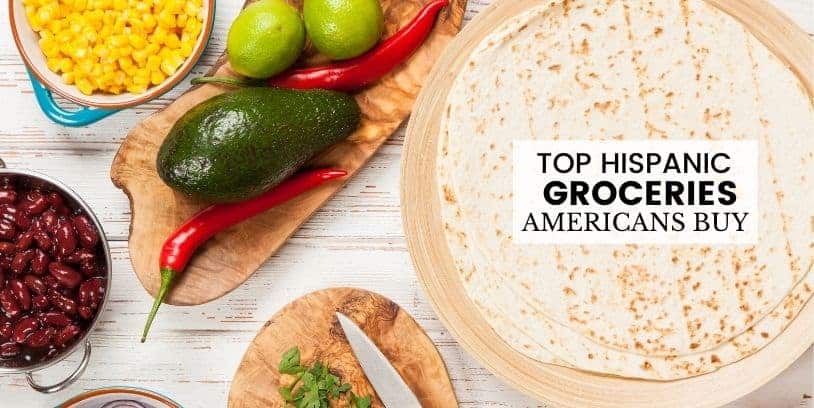 We reveal the most popular Hispanic grocery items Americans buy.

The Latino community is changing the country’s demographic landscape and, at the same time, changing the menu of the general population.

Once considered novelties, these Hispanic grocery items are becoming the norm in every American household.

The consumption of tortillas has increased rather significantly over the past decade. According to an analysis by Future Market Insights, the global Tortilla market is projected to be valued at US$ 12,324.4 Mn by 2028 end, expanding at a CAGR of 3.7% during the forecast period 2018-2028.

Whether you need to make homemade tortillas, bread, or tamales, the baking craze of 2020 will reach corn and flour tortillas, with 55% of Americans reaching for masa harina, flour, and tortilla presses to make their own flour-based food.

These dried chiles are becoming more popular in American kitchens. While you may not always find dehydrated chiles at your traditional supermarket, a Hispanic grocery store or ethnic food store is the place to go.

Beans have always been a staple food among the Hispanic population.

However, in the wake of the Covid-19 pandemic, the buying frenzy made the demand for this food to skyrocket.

According to Neilsen, Americans also stocked up on dried beans, up 231% compared to last year.

At Goya (the largest Hispanic food distributor in the U.S.), a more dramatic increase in the bean category: Sales of black beans, pinto beans, and other canned products have spiked as much as 400%. In just one week, Goya has delivered 24 million cans to Hispanic grocery stores and other American retailers.

According to Cacique, a large cheese manufacturer, “cheeses such as queso fresco will find their way into more American kitchens as people adopt a “from scratch” approach and back to basics techniques.”

Dairy Management Inc states that dishes featuring Hispanic or Latin American cheeses have become staples in restaurants across the United States. Hispanic cheeses come in a variety of flavors and textures suitable for many uses.

Hispanic hot sauces keep getting hotter and more popular, not only at Hispanic grocery stores but also in big retailers’ aisles!

From brands like Cholula, Tapatío, and possibly Valentina, consumers and restaurants keep reaching for these sauces to satiate their desire for heat and flavor.

A new report by Fortune Business Insights said the Hot Sauce Market to Reach US$ 3.77 billion by 2026 due to the growing immigrant populations and rising demand for international cuisine.

Tamales are often associated with Mexican food, but they are prevalent in South America as well. The growing Hispanic population in the U.S. is a major market driver.

The increasing millennial population worldwide is a key player on the Tamales trend. In 2017, the global packaged tamales market was dominated by the Americas, with a revenue share of more than 68.29%.

Sanchez believes that carrying a wide variety of choices is the key to success because customers seek out new flavors, and distinctive Hispanic bread presents new alternatives to baked-good consumers.

Several Hispanic breads that are gaining traction among consumers include Conchita, polvorones, madgalenas, and buñuelos.

The U.S. demand for bread and bakery products at the manufacturer level is forecast to rise 2.3% annually in nominal terms through 2022, according to Bread & Bakery Products: United States

However, Carne Asada is more than just that! Carne asada is a sirloin, tenderloin, skirt, or flank steak that’s been marinated in a mixture of herbs, citruses, and spices.

You can find steak at any supermarket, but the most authentic and flavourful carne asada can be found at Hispanic grocery stores or local Hispanic butcher shops.

Tortilla chips are also known as tostadas, and totopos are of Mexican origin.

Changing lifestyles and rising demand for on-the-go food due to hectic work schedules drive the product demand and growth of this market.