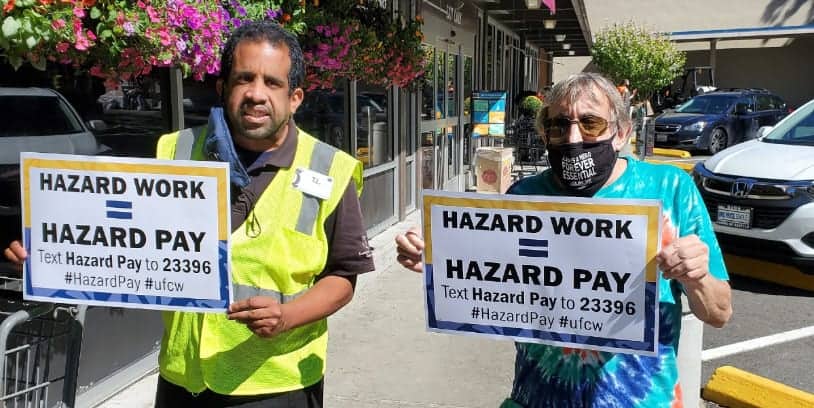 On February 3, Seattle’s mayor signed the City Council’s ordinance mandating hazard pay, finding that grocery store employees who have been working during the COVID-19 emergency deserve the extra compensation.  The Council recognized that the workers perform hazardous tasks or work involving physical hardship that may cause extreme physical discomfort and distress due to the significant risk of exposure to the COVID-19 virus.

The hazard pay order will remain in effect until the pandemic emergency is over. Still, in four months, the City Council will review the ordinance for modifications, depending on progress on COVID-19 vaccinations and state Department of Health stipulations.

The two associations representing retailers in Washington state had filed a lawsuit in the U.S. District Court for the Western District of Washington seeking to stop the pay-for-risk order for supermarket workers in Seattle.

Attorneys for NWGA and WFIA asked the court to declare the ordinance invalid and unconstitutional and for an injunction to stop any action from enforcing the regulation on the grounds that it is preempted by federal law regulating collective bargaining and unfair labor practices and that it violates the equal protection and contract clauses of the U.S. and Washington constitutions.

On Thursday, U.S. District Judge John Coughenour ruled to dismiss the lawsuit and ruled in favor of the Seattle Council.

“Given the city’s findings that large grocery businesses have earned record profits during COVID-19…and that grocery store employees are at significantly heightened risk of contracting COVID-19…This is a reasonable grounds for the distinctions drawn in the ordinance,” Judge Coughenour wrote in his decision.

“The city’s hazard pay ordinance is a good law that provides temporary additional pay to the frontline workers in our grocery stores who have been putting their health and safety on the line every day since the pandemic began. The pay provides some additional income for these workers as their jobs have increased risk, increased demands, and increased hazards. And these workers’ labor is what has allowed the rest of us in the community to get access to the food and other necessities we need and has resulted in the huge increased profits for the grocery store corporations,” Guenther said.

“This is a big win for grocery store workers who deserves this hazard pay and also a big win for all the other municipalities out there considering passing their own hazard pay ordinance that these laws are legal and will withstand the bullying lawsuits of the industry,” Guenther added.

In response to the ordinance, two QFC stores, which are part of the Kroger supermarket chain, will be closed in April, putting 109 workers out of work.

“Unfortunately, Seattle City Council didn’t consider that grocery stores – even in a pandemic – operate on razor-thin profit margins in a very competitive landscape,” QFC said in a press release. QFC said its operating costs have increased during the pandemic and that there were “ongoing financial losses” at the two stores. With the requirement for the additional risk payment, “it becomes impossible to operate a financially sustainable business.”

In California, Kroger also announced two Ralphs stores and a Food 4 Less in Los Angeles, and two others in Long Beach closures due to pay-for-risk ordinances passed in those cities. The supermarket chain said those stores were also operating at a financial loss.