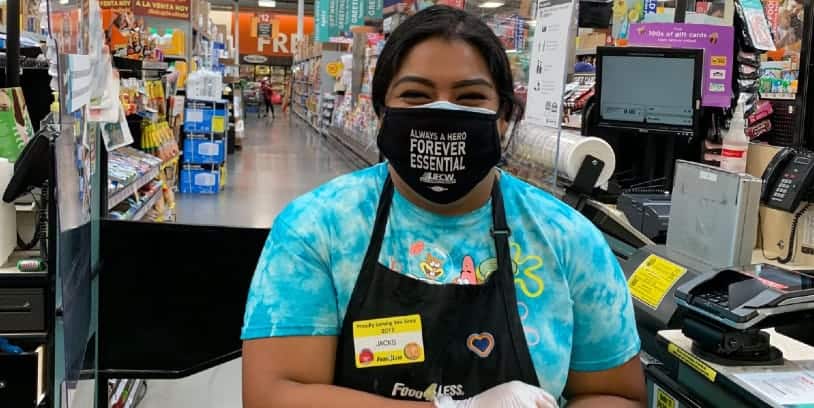 The measure, which will be in effect for 120 days, will increase wages for more than 26,000 supermarket and pharmacy workers and only awaits Mayor Eric Garcetti’s signature for implementation.

In a press release, the UFCW 770 union said it has been fighting for hazard pay for essential workers since the start of the Covid-19 pandemic.

Workers signed hundreds of cards sent to Council members and offered testimony at city sessions to expose the havoc the pandemic has wreaked on their lives and the lives of their families. As the virus enters its second year, supermarket and pharmacy workers are still being infected and even dying, UFCW 770 said.

At Wednesday’s session, Councilman Mark Ridley-Thomas called the temporary pay raise a “matter of fairness,” the Los Angeles Times reported. “It’s our way of saying we vindicate their dignity and the dignity of all workers,” said Ridley-Thomas, whose district includes the Koreatown, West Adams, and Mid-City neighborhoods.

“We applaud the Los Angeles Council members for doing the right thing and recognizing the sacrifices our members make every day to serve their communities during a prolonged global pandemic,” said John Grant, President of UFCW 770.

In the report the Los Angeles City Council requested from Chief Legislative Analyst Sharon M. Tso, the temporary ordinance’s potential economic impact was presented, which showed a picture of benefits and detrimental situations for businesses and employees.

According to the report, with the ordinance, employees would have a temporary increase in income and increased purchasing power, triggering a temporary increase in demand for goods. This additional demand for goods could lead to increased business activity in the city, which would benefit other businesses in the town. Employees could also use the higher wages to pay off their debts or increase their savings rate.

However, according to the analysis, businesses would have to reduce costs or increase revenues, as the increased labor force will eliminate any current profit margin. Therefore, affected supermarkets could raise product prices to offset the additional wage cost.

It could also cause a delay in store openings, renovations, and wage increases/promotions. There is a risk that supermarket chains could reduce hours, benefits, wages, or lay off employees.

According to UFCW770, supermarket and pharmacy workers continue to face the risk of COVID-19 contagion. To date, more than 5,800 union members have been infected with the virus.