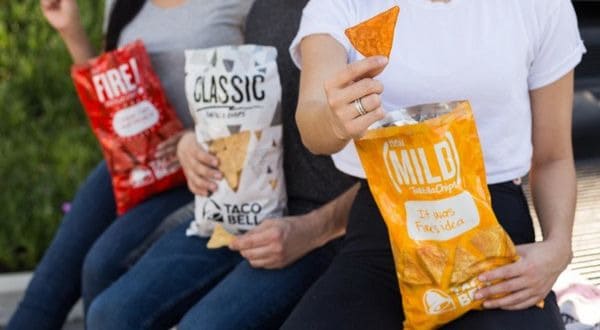 Many are fans of the Mexican inspired cuisine that Taco Bell brings to its customers. Taco Bell fanatics everywhere can now rejoice as the popular food chain announced its plan to roll out their tortilla chips to grocery and convenience stores.

Inspired by its hot sauces, the brand restaurant will offer tortilla chips in Fire and Mild sauce packet flavors, as well as Classic. According to the Yum Brands owned chain, this will give fans a chance to enjoy the taste of Taco Bell in chip form. The tortilla chips will also come in sauce packet designs.

“This launch of our first line of sauce packet-inspired chips gives our fans a new way to access a taste of Taco Bell,” said Marisa Thalberg, Chief Brand Officer, Taco Bell Corp. “Our sauce packets are one of the brand’s most unique aspects and were the natural choice for both the flavors and packaging of our tortilla chips.”

Taco Bell’s tortilla chips will be released in May

Produced by Sugar Foods, these tortilla chips will join the line of dips, sauces, shells and seasoning mixes that Taco Bell sells in partnership with Kraft. According to AdAge, the Mexican brand restaurant partnered with Sugar Foods in order for the chips to “stand out as uniquely Taco Bell.”

Taco Bell’s packaged chips will hit grocery stores in May.