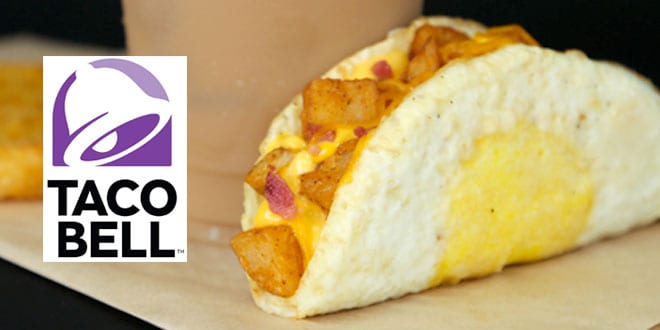 Taco Bell will be releasing a new breakfast menu item by the end of this month, proving that anything can be a taco shell. The breakfast item is the Naked Egg Taco, a fried egg taco shell filled with potato, bacon or sausage and cheese.

The menu item was first tested in Flint, Michigan and will cost $1.99 when it is released on August 31, 2017. According to the Taco Bell website, it can also be ordered as a breakfast combo that includes a coffee or medium drink and 2 Cinnabon Delights© or a hash brown for $3.99.

Taco Bell is known for trying to push the boundaries to coming up with the perfect taco shell. First it was the Naked Chicken Chalupa, which was a taco shell made of fried chicken. Then, the Doritos Locos Tacos became a huge sensation and gained one billion dollars in sales. The Mexican-style franchise is known for coming up with creative and fun foods that draw their customers in.

With McDonalds’s all-day breakfast release in 2015 and splurge of profits gained from that choice, more fast food chains are starting to pay attention to the power of breakfast menu’s. Breakfast time also seems to be a time for experimenting, as shown by Taco Bell and Chick-Fil-A. Chick-Fil-A also released a new item, a Hash Brown Scramble, which has meat, scrambled eggs, grated cheese and is heavy on the potato tots. It can come as a bowl or a burrito.

According to their website, Liz Matthews, Chief Food Innovation Officer at Taco Bell Corp., said, “The Naked Egg Taco strips down the traditional breakfast taco, allowing us to deliver a new flavor experience in every single bite. Shell innovation is at the core of where we experiment – and whether it’s crispy chicken, biscuits or waffles that wrap up menu item classics – we bring our fans craveable and unexpected food experiences that leave them wanting more.”

Fans in select cities will have a chance to reserve a table inside Taco Bell and taste its newest menu item leading up to the nationwide launch.