Home » Agricultural Industry » Rudy Arredondo, Defender of Latino farmers in the US 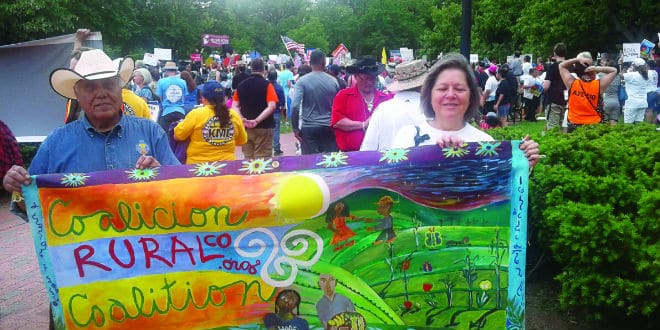 If there is anyone who really knows the life of Latinos in the agricultural fields of the United States, it is undoubtedly the Mexican Rudy Arredondo, founder and president of the National Latino Farmers & Ranchers Trade Association.

Working in the harvesting of crops with his parents during his childhood, adolescence and in his adult life, educating and defending the labor rights of immigrants and the work of the small Latino farmers, Arredondo has lived the transformation in the fields and the impact that the growth of immigration has had in the last half century.

Arredondo was born in the Santiago valley in Guanajuato, México. His father, who was a farmer, immigrated to the United States in search of better opportunities in the early 1940s. When he was 3 years old, with his mother, they crossed the border and settled with their father in the Río Grande Valley close to Edinburg, Texas, where they worked in the fields.

“Since we didn’t have money to pay a babysitter, since I was 5 years old, my mother would bring me to work with her in the fields,” Arredondo remembers. During his childhood and adolescence, he traveled around the country with his parents working the harvest seasons.

During that time as day laborer, Arredondo had his first experience working as a volunteer in the early days of the Union of Field Workers, which later achieved a great recognition with his leader César Chávez.

He divided his time between the fields and his study. He graduated from high school, went to college in Edinburg where he studied business administration and did military service.

Due to his experience and knowledge of Latino field workers, around 1974 a law firm in the city of Washington, DC, offered him work as a paralegal in the area of legal aid to farmers.

The number of Hispanic farmers has increased

That’s where he began to explore the political world and the functioning of government agencies. In the Rural Housing Alliance, he served as general director of the area west of the Mississippi to help Latino families to own homes and was an investigator of cases of discrimination against agricultural workers in the Department of Agriculture.

In the late 1990s, Arredondo opened his own consulting office in terms of civil rights and as a member of the board of directors of the Rural Coalition, he noticed the rapid growth of Latino farmers in the country and the lack of an organization to represent them. “I realized that even though the Coalition was multi-ethnic, the voice of Latinos was not strong enough for the needs of this group,” Arredondo said.

According to the 2002 Agricultural Census, the number of Hispanic farmers had increased to 50,592 throughout the country. Given this situation, Arredondo decided to form the National Latino Farmers & Ranchers Trade Association.with a group of Hispanics.

During more than a decade, their association has been dedicated to offering small Latino farmers, whose number has doubled to almost 100,000 according to the 2012 Agricultural Census, technical assistance, information to obtain government resources, translations, help to prepare proposals, access to credit and markets and lobbying the government. Rudy Arredondo became the voice of these farmers who continue to fight for better opportunities to grow and that their products reach more consumers in the US.