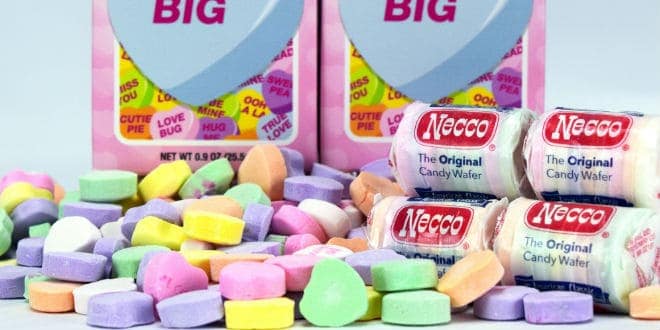 After the shutdown of Massachusetts NECCO (New England Confectionery Company) factory by Round Hill Investments LLC., fans of the classic Sweethearts candies and Necco wafers thought their confectionary favorites were gone. Now, a new company has come to the rescue to purchase the Necco wafers and Sweethearts brands.

Spangler Candy Co., based in Ohio and maker of Dum-Dum lollipops and seasonal candy canes, announced back in June that it had acquired the two candy products, but failed to complete its purchase.

The company was then sold to Round Hill Investments LLC., which in turn sold the New England Confectionary business to an unnamed confectionery manufacturer, who is now revealed to have been Spangler.

According to a Spangler press release, the brands and equipment only were obtained following a series of transactions precipitated by the New England Confectionery Company (NECCO) bankruptcy.

“The combination of Dum-Dums, candy canes, Sweethearts, and NECCO Wafers will make Spangler a stronger company within the global confectionery market and will be a catalyst for growth,” said Spangler Chairman and CEO Kirk Vashaw.

Oldest Candy Company in the U.S. Shuts Down

Spangler has not yet decided whether the two candy lines will be made in Boston or Bryan, Ohio, but plan to relaunch the Sweethearts line for Valentine season 2020 and reintroduce Necco Wafers to the marketplace in 2019.

The Sweethearts brand was created in 1901 and is an original Valentine treat, iconic for its heart shaped candies with messages imprinted on them such as “Love Me,” and is a particular brand that Spangler is excited about.

“Sweethearts and Necco Wafers are iconic brands with rich hundred-year-plus histories. These are perfect additions to our portfolio of traditional candies,” Vashaw added. “We are particularly excited about the Sweethearts brand. Many people have memories of sorting through their box of Sweethearts to find just the right message to share.”

Along with Sweethearts and Necco Wafers, Spangler also will manufacture Canada Mints, a brand that is made on the same equipment.