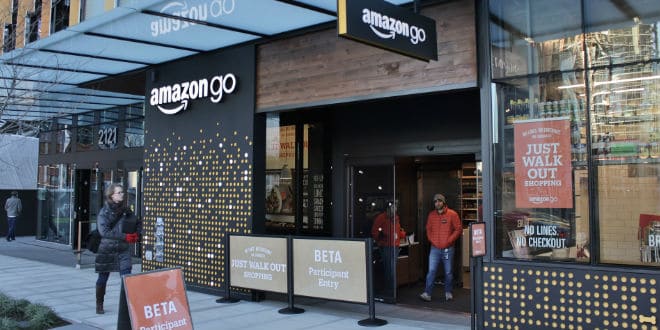 Although Amazon has remained completely silent about its plan to open 3,000 cashier-less Amazon Go stores by 2021, the food industry has reacted with surprise and concern.

The news was published by Bloomberg a few days ago and with Amazon’s silence to confirm the story, it has increased the anxiety among independent stores and supermarket worker unions, which see their future threatened, according to analysts.

The United Food and Commercial Food Workers International Union, which represents more than one million workers in supermarkets and retail in the United States, issued a statement rejecting Amazon’s purported intentions to open thousands of cashier-less stores, considering them a threat to industry workers.

In the statement, the union warns, “It is time for America’s elected leaders to wake up to the economic threat Amazon poses to our economy. Make no mistake, opening cashier-less stores is not about convenience; rather, it is about greed.”

Union president Marc Perrone, added, “Jeff Bezos and Amazon are deploying a business model that poses an existential threat to millions of American jobs, and it is time we are honest about the devastating impact this will have on our nation and tens of millions of hard-working American families.”

Currently, the e-commerce giant has three Amazon Go stores in Seattle and plans to open more in Chicago, San Francisco and New York. So far, the company has confirmed that it plans to open 10 cashier-less stores before the end of 2018 and reach 50 by the end of 2019.

The futurist cashier-less stores offer a wide variety of food products and beverages and have a large number of sensors and cameras to track what customers buy.

All they need is to have the Amazon Go application activated on their smartphones, which is scanned when they enter the store so every time they place an item in their shopping bag, the purchase is registered in the application, completely eliminating the process of payment at the cashier.

According to Forbes, the opening of thousands of Amazon Go stores in the country would have a massive impact that would put the survival of many convenience stores at risk because customers always prefer to avoid wasting time in line to pay for their purchases.

Independent small supermarkets could also lose their customers by not having the resources to advance their technology and reach Amazon Go’s level to compete.

“If the Bloomberg story is right, the opening of so many cashier-less stores will change the consumer experience at retail and fortunes will be made and lost,” said Richard Kestenbaum, co-founder of Triangle Capital LLC, in an analysis published by Forbes.