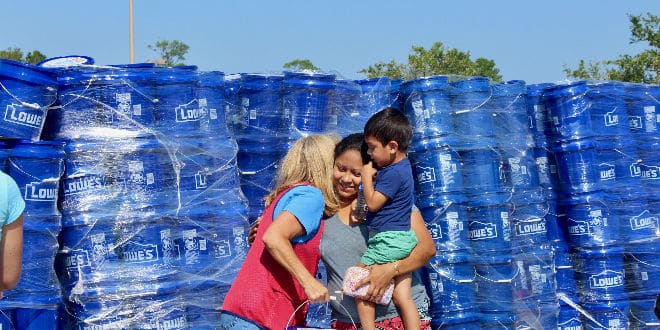 On September 20th, Lowe’s Home Improvement hardware store held an event for aid relief where the company donated free meals and critical supplies to thousands impacted by Hurricane Florence, which the National Weather in Wilmington referred to as “the storm of a lifetime.”

The events were held in New Bern, Jacksonville and two locations in Wilmington.

Distributor of Hispanic products, La Tortilleria and Abasto Magazine teamed up and drove to one of the events at Lowe’s in Wilmington to help distribute food products to residents.

Among the companies whose products were given to the community were Verde Valle, Dolcetto pasta, Maruchan, CLORALEN, Ariel, El Dorado and Tampico, as well as plastic plates.

“This is just an awesome event for us to be able to put on for the community. It’s been devastated by the hurricane that came through. People are still affected, the community and our employees are still affected and this is just another way for our company to give back,” Bill Ferimer, store manager at Lowe’s, told Abasto. “This is a way for us to really stand out in that our purpose is to help people love where they live. We love Wilmington, it’s a great community and this is another way for us to help promote that.”

The event’s initial timeframe was from 3 pm to 6 pm but went on long into 7 pm. This was followed by free dinner for Wilmington residents from Aramark, an American foodservice company.

In the coming weeks, Lowe’s volunteers have pledged to distribute more than 10,000 buckets filled with more than $500,000 in vendor-donated clean-up and recovery products to help recovery efforts throughout the Southeast, according to the company.

Lowe’s has committed $2 million to support relief efforts for associates, customers and communities in response to the hurricane’s devastation. According to the company, Lowe’s is continuing to work with nonprofit organizations and government agencies to determine immediate and long-term support by local communities.

The hardware company employs more than 10,000 people in areas impacted by the storm.