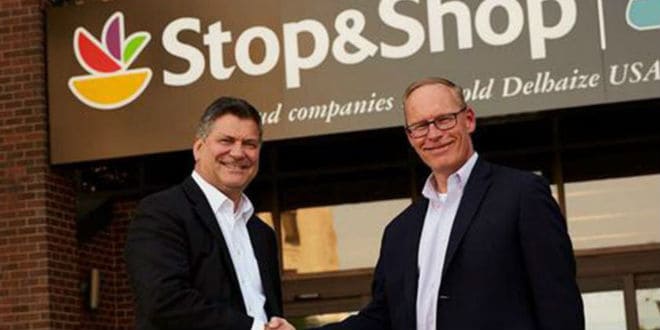 Mark McGowan, Stop & Shop President, announced his decision to leave the organization after 30 years, but at the company’s request, he will remain with Ahold Delhaize USA through year-end, to ensure a seamless transition. Gordon Reid, President of Giant Food, will become the new President of Stop & Shop.

Reid will begin transitioning to this new role in the coming weeks, and officially assume the role in late July. Ira Kress, SVP, Operations for Giant Food, has been appointed as interim President of Giant Food, said Ahold Delhaize USA in a press release.

Last April, Stop & Shop’s 31,000 associates in New England went out on strike for 11 days, affecting 246 stores. A Stop and Shop spokeswoman told the Boston Globe that McGowan’s decision to leave the company had no relation to the strike.

“Mark McGowan has had a tremendous impact for the Ahold Delhaize USA brands, as well as the communities they serve, and we thank him for his 30-years of tireless service. Under his leadership, Stop & Shop has built a strong foundation for transformation and expanded success that continues through our ‘Reimagine Stop & Shop’ initiative,” said Kevin Holt, Chief Executive Officer of Ahold Delhaize USA. “As Mark transitions, I have full confidence that Gordon Reid is the right leader to continue this transformation by repositioning the business for future success and rebuilding customer loyalty.”

McGowan career started in 1991 as a manager trainee at Stop & Shop. “It’s been an honor and privilege to lead the Stop & Shop brand. I’m grateful for our associates who are incredibly dedicated to serving our customers every day, and I’m extremely proud of all that we have accomplished together. As Stop & Shop embarks on the next phase of its transformation, now is the right time for me to make this change,” McGowan said in a statement.

Gordon Reid currently serves as President of Giant Food, which has 165 stores in the greater Washington, D.C., area. Reid joined Giant Food, an Ahold Delhaize USA company, in 2013 and has more than 35 years of international retail experience, having served in a variety of management roles at Boots, A.S. Watson Group and The Dairy Farm Group before joining Giant Food.

Reid is active in the community and serves as a member of the USO Washington-Baltimore Executive Board, Capital Area Food Bank Board and a member of the Partnership for a Healthier America. He holds a bachelor’s of science in pharmacy from Heriot Watt University in Edinburgh, U.K. and a master’s degree in business administration from Nottingham University Business School in the U.K.

“We are excited for Gordon to join the Stop & Shop brand,” added Holt. “Gordon is an excellent leader of people, with a strong focus on serving customers, engaging associates and supporting local communities. During his time at Giant Food, the brand has successfully grown sales and market share, and has strong associate engagement results.”