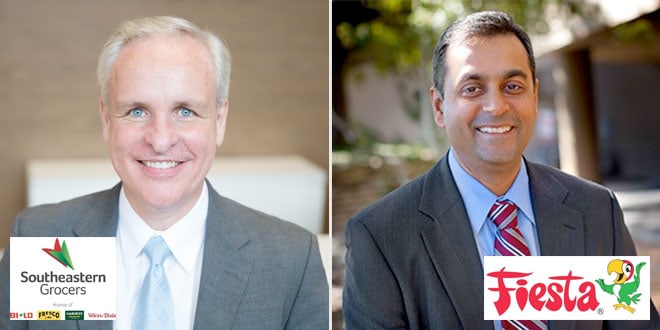 Two major supermarket chains, Southeastern Grocers in the Southeast, and Fiesta Mart in Texas, announced the appointment of new CEOs for their companies.

“We are pleased to welcome Anthony as CEO of Southeastern Grocers as he was always part of our succession plan,” the Company said. “He has played an integral role in our successful transformation over the last 18 months and we are positive he is the right leader to guide SEG. Anthony brings significant industry expertise, and we are confident that he will continue to improve the business to the benefit of our dedicated customers across the Southeast.”

Before joining SEG, Hucker was President and COO of Schnucks, based in St. Louis, MO, one of the Midwest’s leading food retailers and one of the largest privately held supermarket chains in the U.S. Anthony also held the position of President of Giant Food, based in Washington DC, the Mid-Atlantic’s premier grocery store chain and served on the executive board of Ahold USA.

Prior to joining Giant Food, Hucker spent seven years at Wal-Mart in a variety of leadership positions, internationally and domestically. He began as the CIO of the Americas, formed the Global Format Development Division and was promoted to head of strategy and business development for Wal-Mart USA and was a corporate officer of the world’s largest retailer.

“I’m grateful to our leadership team for the smooth transition over the past six weeks and I’m excited for the opportunity to continue to drive the strategic direction of the company. I’m humbled and honored to lead our team of more than 50,000 associates who are our greatest assets, putting our customers first, always,” Hucker said. “Over the past two years, we’ve made substantial progress in our transformation, and we’re ready to push forward.”

Sid Keswani, a former Target Corp. executive has been named top executive of Houston-based Fiesta Mart Inc., replacing Michael Byars, who has been in the position since 2015.

The Hispanic grocery store chain founded in Texas in 1972, operates 68 stores in the Houston, Austin and Dallas-Fort Worth markets. The company is owned by private equity firm Acon Investments, which acquired it from Fiesta’s family owners in April 2015.

“We are very excited that Sid is joining Fiesta at this time in our growth strategy,” Ken Brotman, managing partner at ACON Investments, said in a statement. “He brings a great deal of relevant experience and skills to Fiesta as we look forward to our next phase of growth.”

Keswani formerly served as COO of Aspen Heights, a real estate development company. Before that, he served as senior vice president of operations for Susser Holdings based in Corpus Christi, a retail company with over 625 stores. He also worked at Target for 19 years and eventually became senior vice president prior to his time at Susser.