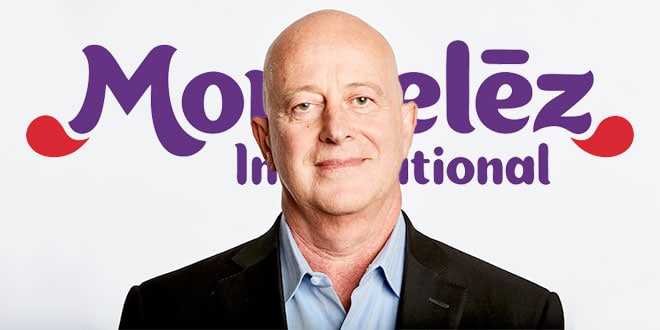 Irene B. Rosenfeld, the chief executive of Mondelez International, leaves after 11 years with the giant food company.

“I am very proud of what our 90,000 colleagues at Mondelez International have accomplished,” said Chairman and CEO Irene Rosenfeld. “Throughout my tenure as CEO, the world and our industry have undergone a period of unprecedented change. During that time, we anticipated emerging challenges, adapted accordingly and created significant value for our shareholders. The outlook is bright for this great company — one of the few that has consistently delivered on both the top and bottom lines, while making critical investments for future growth.”

Rosenfeld continued, saying, “The Board and I are confident that Dirk Van de Put is the right leader to take us forward. He is a seasoned global CEO, having lived and worked on three different continents, with deep experience and expertise in all critical business and commercial operations in both emerging and developed markets.”

Mark Ketchum, Lead Independent Director of Mondelez International, spoke of the company’s excitement to work with Dirk Van de Put to “lead the company through its next chapter of growth.”

He also stated how grateful the company was towards Rosenfeld for all her years of leadership, saying, “Under her stewardship, Mondelez International has become the leading global snacking company, delivering tremendous value to shareholders. We are extremely grateful for her leadership and for agreeing to stay on as Chairman through the first quarter of next year, to ensure a smooth and seamless transition.”

Van de Put has had 30 years of experience in the food industry, recently having been a part of McCain Foods, a Canadian company that is the largest marketer and manufacturer of frozen french fries, potato specialties and appetizers, with sales in more than 160 countries. Before McCain Foods, he also worked at Novartis, Groupe Danone, The Coca-Cola Company and Mars, Incorporated.