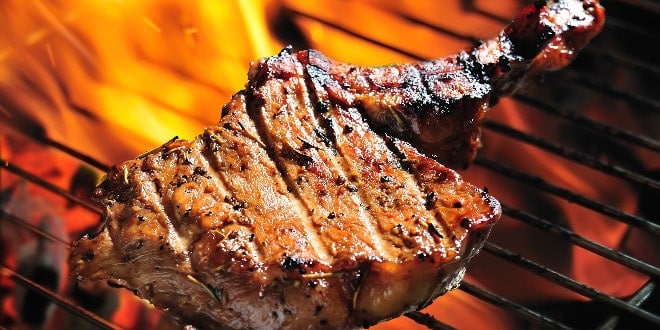 The National Pork Board (NPB) recently conducted a research study through Nielsen revealing that Hispanics and African Americans’ meat of choice is pork.

Jose de Jesus, NPB’s spokesperson, spoke with Abasto to talk about the study’s finding in relation to Hispanics and why it is indeed a cultural thing.

“Yes, pork is part of our culture, it has been for a long time. It’s always available particularly in the most important moments in our culture, so whether you’re celebrating a birthday, a holiday, quinceanera, whatever the case might be, pork is always at the table and I think it’s sort of an emotional connection that we have with the product.”

According to the Nielsen report, a grocery shopping cart is worth $121.47 when pork chops and ribs are in the basket vs $32.54 when they are not. When asked why pork seemed to be so popular during grilling season, even over chicken and steak, de Jesus responded that it is a flavorful protein and is really good.

“I think the flavor, the taste, it’s something that we really appreciate and recognize in pork. Number two is the versatility aspect of it. Pork lends itself to do many different things, unlike perhaps other protein. Consumers are looking for something that is exciting, particularly the Hispanic consumer who is trying to do a lot of different things with family and friends… When you think about the loin in particular, which pork chops are part of the loin in this case, they are a very healthy cut. I think it fits nicely with the season and when you add flavor, it’s perfect,” de Jesus told Abasto.

Pork is the King of Summer Among Latinos

The NPB says pork being unhealthy is a myth

De Jesus argued that although pork is sometimes given a bad reputation or viewed as unhealthy, it is actually a very lean protein.

“Our goal is to try to engage the consumer and let him know about the nutritional value that the product presents. So, we want consumers to understand that they have nothing to fear or feel guilty about because it is very lean.”

When asked if the way the pork is prepared or cooked contributes to how unhealthy or healthy it is, de Jesus told Abasto, “…You can take anything, a vegetable for example, and fry it and it’s probably not going to be that good for you… If you’re used to frying a pork chop, fry it on the grill because it’s a lot healthier on the grill and it tastes really good. Yes, preparation methods, cooking methods are a big deal and can go a long way in terms of how you can make it a little bit healthier for you.”

According to the study, with the insight that Hispanics and African Americans prefer grilling pork over other proteins, the National Pork Board will reach this growing demographic through influencer partnerships who will create original, flavorful and relevant pork recipes for consumers to enjoy at home.

“What we’re trying to do is trying to communicate what we believe are the best attributes for pork. That’s why we’re focused on flavor and that’s also why we’re focused on nutrition. There’s a lot of misconception about our product and it’s just not accurate, so we’re trying to dispel some of those myths. I think our consumers are engaging with a lot of influencers and chefs that have a lot of credibility in the market, so they can help us kill that story because our farmers raise great pigs and they ultimately turn them into delicious meals that everybody can enjoy all year long.”