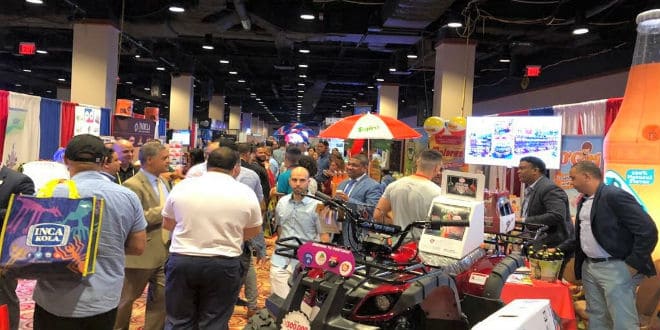 “Is this for real?” Daniel Suriel from America’s Food Basket asked Anthony Peña, the Director of the annual trade show, excitedly and still incredulous after having been told over the phone that he had been the winner of the raffle of a zero-mile Toyota Yaris car at the end of a successful business day at the NSA 2018 show in New York.

The event, which took place Wednesday, August 29 in the event center of the World Resorts Casino in New York, brought together hundreds of suppliers and buyers of food products and various household items, where according to the organizers, negotiations were close to $10 million in six hours of the trade show.

“We are celebrating the food show’s 8th year serving all this northeast area of the country with good merchandise and good prices so that small supermarkets and wineries and in general all food-related industries have the opportunity to interact and do business,” said Rudy Fuertes, president of the association, who ends this year as head of the NSA.

Fuertes emphasized that they are fortunate to have young leaders like Anthony Peña in this association for supermarkets, who are full of energy to promote the NSA’s work of the NSA to support Hispanic grocery stores.

Peña told Abasto that more than 200 companies participated in the trade show, where many of them presented new products in search of being sold in stores. “As you know, New York is one of the most difficult markets and a show like this allows independent stores to conduct their business and make sure they are successful in the neighborhoods where they serve,” Peña explained.

Among those that that visited the trade show was the Dominican Republic consul, Carlos Castillo, who was accompanied by Marius De León, executive director of the Export and Investment Center of the Dominican Republic, reaffirming the profound relationship that the Caribbean country has with the large population of Dominican entrepreneurs in the New York area, who are mostly owners or investors of independent supermarkets.

Likewise, the Assemblywoman for the District 39 of New York, Ari Espinal, a young politician born and raised in Corona, NY to Dominican parents, was present at the commercial show of the NSA 2018. Espinal reiterated her support for independent supermarkets and seeks to be reelected in the September 13 elections to continue being a Hispanic voice in the state Assembly that looks after the interests of the Latino community and businesses.

“With only two months in the position, I brought $217,000 in funds for my district and I submitted two bills because I believe in my community and being born and raised in Corona, I know where resources are needed and this is important to me,” Espinal told Abasto.

NSA directives expect that voices such as that of Assemblywoman Espinal will help improve the regulations that offer incentives to this industry of independent supermarkets, since they have suffered a serious economic impact due to the state law that increased the minimum wage to $15 per hour.

These situations have forced stores to face difficult times with new strategies so that their businesses do not go under, as explained by José Geraldo, who was recently named executive director of the NSA.

“This year, the idea was to bring new companies to the show and open a different market. We must continue to grow and expand our horizons in this growing market, such as the Latin market,” said Geraldo.

He added that they brought companies directly from several Latin American countries for this trade show and created an international pavilion where the companies that look for distributors have the opportunity “to create business with business, which we hadn’t done before because we had only focused on the detail,” said Geraldo.

Like every year, the National Supermarket Association trade show also presented various entertainment spaces with live music, a salsa dancing show, the raffle of the car won by Daniel Suriel and the raffle of a ticket to travel to Puerto Rico, sponsored by Rico Rice from Pan American Grain, which was won by Elvis Díaz.