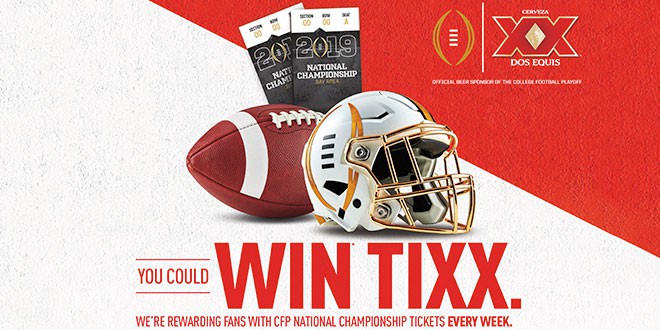 With college football starting back up again, many are anxiously anticipating the season. Luckily for them, Dos Equis partnership with College Football is bringing an exciting promotion. As their Official Beer Sponsor, Dos Equis will give football and beer drinkers the chance to win tickets to the College Football Playoff National Championship game every week.

Fans can send a picture of Dos Equis to XXFAN to 77000 and are entered for a chance to win a pair of tickets to the game.

According to Dos Equis, the College Football Playoff is the 4th most watched event in America.

“It’s a big deal and Dos Equis is already being enjoyed by fans while watching college football and at tailgates… This platform allows Dos Equis to penetrate markets with a locally relevant approach and with an existing strong association between the brand and college football,” Karla Flores, Dos Equis Brand Director, told Abasto.

Dos Equis said the campaign features legends Les Miles and Steve Spurrier, as well as 11 TVCs around four different stories that represent legendary moments in the history of college football, with an “interesante” twist that is consistent with the brand’s communication platform.

In terms of social media, the campaign has more than 22 assets that include fun videos and gifs, as well as Snapchat filters that provide local relevancy for football fans.

On-premise, consumers who take a picture will be surprised with a photobomb and will receive an offer where applicable.

“The ‘Keep it Interesante’ campaign platform is a perfect fit with college football. The embellished storytelling is a natural behavior among fans and we are making the legendary a little more interesante. Through the creative advertising campaign, we show how Dos Equis has always been part of college football throughout its historical and memorable moments,” Flores told Abasto.

Flores said it is the partnership’s third year and it has continued because the company sees positive results in consumer engagement and profitability for its trade partners.

“Everyone loves a good story, especially ones that may be slightly exaggerated! The campaign is replete with tales that may appear to stretch the truth but are always engaging and enjoyable. Since college football is primarily about support for the local team, the flexibility this campaign offers retailers and consumers to personalize the gameday experience is a key ingredient to its success,” Flores said.