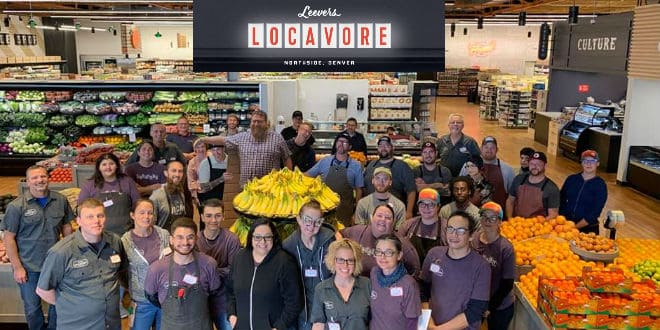 The Leevers supermarket chain has followed the company’s motto, “evolves or dies,” with the opening of its first Leevers Locavore urban store in Denver. Local and organic products, three restaurants, a beer bar, and a cafeteria make up this new concept of grocery stores designed to meet the needs of young professionals living in the northside of Downtown Denver.

In an interview with Abasto, Jorge González, Vice President of Operations at Leevers Supermarkets, offered details on how they created the new concept of Lovacore, which opened its doors on November 21.

“The concept began by thinking about what else we could do for the community, having the space available in a strategic place. Developing the project took two and a half years,” González said.

Leevers Locavore built its new store in a building where a Save-A-Lot supermarket previously operated, located at 38 Avenue and Clay Street, in Denver.

Gonzalez said they did several surveys among more than a thousand area residents to find out what they wanted in a grocery store. Based on their comments, they develop the concept of natural, organic, and local products.

The new Leevers Locavore also has a Queen City Collective coffee bar and the local beer bar Diebolt Brewing. “We have a permit for our customers to drink a beer while they shop at the store,” González said.

Soon, Locavore will be offering a transport service with bicycles for customers who do not want to walk to their homes carrying shopping bags. Also, home delivery and click and collect services will be available.

Related Article: From Cleaning Floors to VP of Operations at Leevers Supermarkets

Leevers plans to open more urban stores in Denver. To lead this project, the company appointed Chris Franklin as the new vice president of Locavore, due to his experience with the concept of organic stores.

“This is a more complex job because each Locavore store depends on what the community in the area wants, unlike the concept of plug and play, which is a franchise where everything is the same in the store,” Gonzalez said. Leevers Locavore has 55 employees who will also become the store owners.

The Leevers supermarket chain is a family business with 81 years in the industry, and since 2012 its more than 450 employees became owners of the company that operates 17 Save-A-Lot and Colorado Ranch Market supermarkets in Colorado.