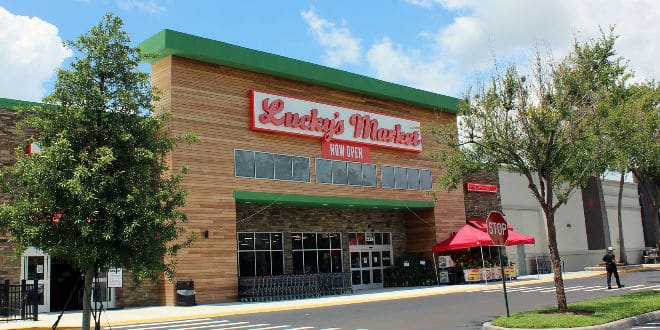 The grocery chain Lucky’s Market will close 20 of its 21 supermarkets in Florida by February 12 and canceled plans to open another 14 stores in the state, affecting about 2,500 employees, the South Florida Sun Sentinel newspaper reported.

According to media reports and industry experts, store closures would have been as a result of the decision taken by retail giant Kroger last December to withdraw its financial support to Lucky’s Market.

Lucky’s Market has 39 grocery stores in 10 states, seven of them in Colorado, where it was founded by chefs Bo and Trish Sharon in 2003. The couple created the concept of a supermarket where organic and natural foods are offered to prices that are available to everyone and chose the slogan “Organic for the 99 percent.”

Related Article: Fairway Market on the Verge of Second Bankruptcy

The company, based in Boulder, Colorado, has not made an official announcement about the closure of 20 supermarkets in Florida.

In 2016, when Lucky’s Market had 17 stores, Kroger announced its plan to invest in the company. In the following three years they grew to 39 locations, 21 of them in Florida and a regional distribution center in Orlando, which will also close operations.

Gary Millerchip, Kroger senior vice president and CFO, said during the company’s Dec. 5 earnings call with investors that the decision to divest its ownership share followed a “portfolio review.”

Neil Z. Stern, a senior partner at Chicago-based retail consulting firm McMillanDoolittle, told the Sun Sentinel that “unfortunately, Lucky’s expanded very quickly after Kroger got involved. They spread too much, took questionable real estate and ultimately had a lot of low-performance stores that were not sustainable. Still, this is a big reduction.”

Liquidation sales at Lucky’s Market stores began Tuesday. The West Melbourne location is the only grocery store that will remain open in Florida.