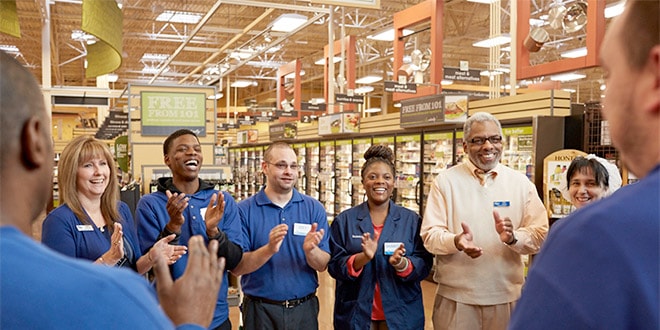 After Walmart gave their big announcement last week in response to Donald Trump’s presidency, Kroger followed suit with their own contribution.

The company founded by Bernard Kroger in 1883 in Cincinnati, Ohio, announced that its family of stores is actively hiring to fill an estimated 10,000 permanent positions in its supermarket divisions.

The retailer also announced that its total active labor force grew by more than 12,000 associates in 2016. Over the past eight years, Kroger has created more than 86,000 new permanent jobs. These figures do not include jobs created as a result of capital investment, such as temporary construction work, nor do they include increases due to company mergers. Kroger and its subsidiaries now employ more than 443,000 associates.

Kroger also hired more than 9,000 veterans in 2016 and has hired more than 44,000 veterans since 2009 as part of its commitment to active duty troops and the country’s 23 million veterans through “Honoring Our Heroes,” a program designed to show the company’s deep gratitude towards the military service men and women and their families. In addition, Kroger is proud to have helped the “100,000 Jobs Mission” overcome its original goal in January 2014, seven years earlier. The “100,000 Jobs Mission” is a coalition of more than 130 companies with the common goal of hiring more than 100,000 transition service members and military veterans by 2020.

Kroger and Walmart are not alone

Other companies are also planning on adding and/or keeping jobs in the country. General Motors Co. and Amazon.com Inc. have also announced plans to add jobs in the United States. German drug and chemical firm Bayer AG, which is waiting for approval to buy $66 billion US seed company Monsanto, stated last week it would maintain more than 9,000 jobs in the United States and add 3,000 new high-tech jobs.