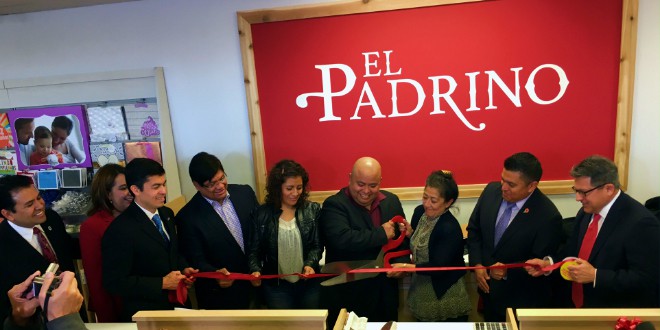 El Padrino store in Kansas City, Kansas has been selected to be prototype for the first “store-in-store” for Hallmark’s new line of products, VIDA, targeting the Latino community.

This store is one of the many where Hallmark’s new VIDA brand is offered. The new partnership is of great benefit for both companies involved.

Carlos Ayala, Hallmark’s Multicultural Division leader, said that Hallmark’s VIDA line of cards and products were created for the Hispanic population, considered to be the fastest growing population in the United States.

“It’s the first relationship that we’ve established with a Hispanic business throughout the country. I constantly kept coming in here and looking at the store, but there was something about this store and the community,” Ayala recalled. “And we felt that both the store and the location … were a natural fit for (Hallmark).”

“This partnership makes us part of the community,” Ayala added.

“I believe Hallmark picked us because we are so well-known in the Hispanic community; people who do not speak English feel comfortable shopping here. They came (to us) with the idea of introducing the VIDA line, which is directed to the Hispanic customer,” said Raul Villegas, El Padrino owner, during a phone interview. “I thought it was a good product for our customers because we are already in the business of party supplies.”

El Padrino owner called the partnership with Hallmark a special moment in his life and in the life of his company. Villegas came to the U.S. when he was 11 years old and just became a U.S. Citizen last year.

Currently, there are El Padrino stores in Kansas City and Olathe.  If the VIDA line is a success, El Padrino said he will consider opening more stores.