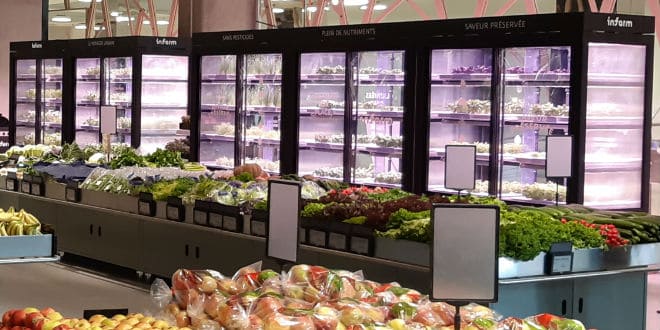 Kroger supermarkets, and Infarm, an urban farming network based in Germany, announced a partnership that will bring modular living produce farms to North America, delivering produce picked so fresh you can see the roots. The partnership between the grocery store giant and Infarm marks the first-of-its-kind in the United States.

The living produce farms will launch this month at two of the 15 stores planned at QFC – a Kroger banner – at locations in Bellevue and Kirkland, Washington, according to a press release.

With the use of hydroponic technology, produce will grow on-site at the participating QFC stores, removing the need for extended transportation and storage and producing a more eco-conscious product.

“Kroger believes that everyone deserves to have access to fresh, affordable, and delicious food, no matter who you are, how you shop, or what you like to eat,” said Suzy Monford, Kroger’s group vice president of fresh. “Our partnership with Infarm allows us to innovate by combining ground-breaking in-store farming technology with our passion for fresh, local produce, and ecological sourcing. Kroger is excited to be first to market and offer the best of the season, and we’re proud to lead the U.S. on this journey.”

The farms are designed to scale and will provide shoppers the freshest and most sustainable living produce options available.

“We want to make fresh, pure, tasty, and nutritious produce available and affordable for everyone,” said Erez Galonska, CEO and co-founder at Infarm. “Kroger’s commitment to innovation, quality, and flavor make them the perfect partner with which to launch our business in the United States and for the first time in North America.”

Kroger’s partnership with Infarm is a model of innovation in the grocery industry, as the retailer has fully invested in its Zero Hunger | Zero Waste social impact plan that aims to end hunger in local communities and eliminate waste across the company by 2025.

Founded in 2013 by Osnat Michaeli and the brothers Erez and Guy Galonska, Infarm combines highly efficient vertical farms with IoT technologies and Machine Learning, to offer an alternative food system that is resilient, transparent, and affordable. The company distributes its smart modular farms throughout the urban environment to grow fresh produce for the city’s inhabitants.

Infarm has over 500 farms in stores and distribution centers around the world and has partnered with +25 major retailers in seven countries: Germany, France, Switzerland, Luxembourg, Denmark, the United Kingdom, and the United States.