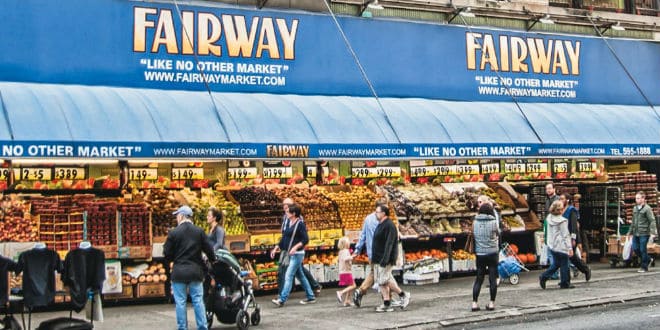 Fairway Market put an end to rumors of a possible liquidation by filing for Chapter 11 bankruptcy protection in the U.S. Bankruptcy Court for the Southern District of New York on Thursday, January 23, to complete its strategic sale process.

The renowned supermarket chain also announced that it accepted an initial offer from Village Supermarket, Inc. to buy five of its stores and its distribution center for $70 million, but with the possibility that other companies may bid to buy the properties.

In addition, the Company will execute a Court supervised sale process to continue to negotiate for the sale of its remaining store locations.  An Ad Hoc Group of the Company’s senior lenders are supportive of the sale process and have agreed to provide the Company with up to $25 million in debtor in possession financing.

The New York Post reported a couple of days ago that Fairway Market was allegedly preparing to file for Chapter 7 bankruptcy to liquidate the company, due to its financial problems and lack of buyers. The nearly 100-year-old grocery store chain denied the newspaper’s report, claiming that its 14 supermarkets were still operating normally.

According to a press release in which Fairway Market reports that it is filing for Chapter 11 bankruptcy for the second time, the company says it will continue to conduct business and serve customers at its stores across the tri-state area and expects no interruption in service during the Court-supervised process.

“We would like to extend gratitude to our employees, vendors, distributors, and customers for their support, dedication, and loyalty over the years. It has always been Fairway’s priority to ensure our patrons are provided with the most optimal grocery experience, with the freshest foods and best quality products, and our employees feel appreciated,” said Abel Porter, Chief Executive Officer at Fairway Market.

“After careful consideration of all alternatives, we have concluded that a Court-supervised sale process is the best way to meet our objectives of preserving as many jobs as possible, maximizing value for our stakeholders, and positioning Fairway for the long term success under new ownership,” Porter added.

Village Super Market, Inc. operates a chain of supermarkets and specialty markets in the Northeast under the ShopRite and Gourmet Garage banners.

“Perry and Nick Sumas opened the first Village Market in 1937, and our family continues to believe deeply in the importance of neighborhood grocery stores.  We appreciate that Fairway’s loyal customers are concerned about the future, and if we are successful in our bid, we are committed to keeping Fairway, including its name, unique product selection and value, a part of this community,” said Robert Sumas, CEO of Village Super Market, Inc.

In May 2016, Fairway Group Holdings filed for Chapter 11 bankruptcy for the first time, in which its creditors agreed to swap existing debt for new stock and debt through a reorganization.

Despite their efforts to get out of the financial crisis and due to increasing competition with the arrival of supermarkets such as Trader Joe’s, Whole Foods to the New York area, Fairway Market was unable to recover and is now seeking a second chance to sell its stores and avoid liquidation.