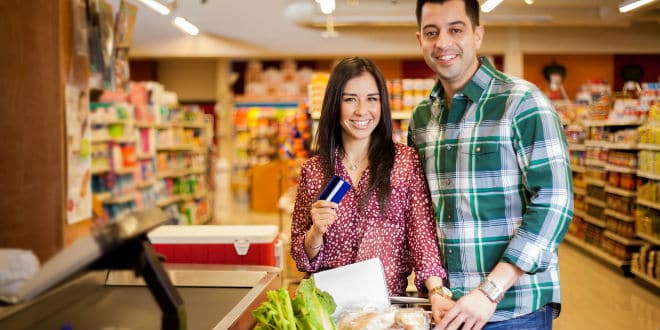 A “divided country” doesn’t only define the political climate in the U.S., but also talks about the general perspectives of the consumer’s trust about the economy and its impact on their lives, including their shopping decisions. In the fifth installment of our annual report, ThinkNow Pulse, we dive deeper into the sentiment of consumer confidence among white Hispanic, African American, Asian and non-Hispanic groups and found marked contrasts in their expectations last year compared to previous years.

The study also revealed a working base of consumers with access to stable income. This new report presents three-year trending data to give brands and companies an unprecedented view of how economic sentiment in multicultural populations has changed over time.

When consumers have more income from disposal, it is fair to say that they spend it with the brands they love. In 2017, most of Americans showed that the income in their homes, including all sources of income, remained the same in 2017 in comparison to the same period as last year. This followed a significant improvement in 2016.

This finding is consistent with data from the American Community Survey showing a similar trend of median family income. While it is tempting to see wage stagnation as detrimental to company results, keep in mind that 2016 represented a large increase in average household income, a record increase in fact.

Therefore, maintaining that same level of income after a record increase the previous year is positive. We can even see that these figures improve this year with the approval of the tax reform.

If we analyze the main ethnic segments, we see that Hispanics were the most likely to report higher revenues in 2017. However, there is a small caveat here since only 35% of Hispanics said their income improved in 2017 compared to 43% in 2016, which represents a slight decrease.

The fact is that Hispanic income is steadily improving, which implies greater access to spendable funds, which works well for brands and companies looking to start or expand their Hispanic marketing efforts in 2018.

The Multiplier Effect: The Importance of Multicultural Millennials in the Market

Like last year, only around 2 out of every 10 consumers said that their financial situation worsened due to an employment situation. In fact, employment figures were better in 2017 in the four main racial/ethnic segments.

Among them, Hispanics and African American saw the worst fall in the state of unemployment between 2015 and 2017, a fall of 8% and 12% respectively.

Our data reflects the most recent employment data published by the Bureau of Labor Statistics and, once again, is a good indication for companies and brands. Constant income and high employment stimulate consumer spending. We saw evidence of this during the record holiday retail shopping season of 2017 that exceeded the forecasts of the National Retail Federation by 5.5%.

While we will see this level of spending as we move forward in 2018, some purchases, such as house purchase levels, have remained relatively unchanged for the past two years. 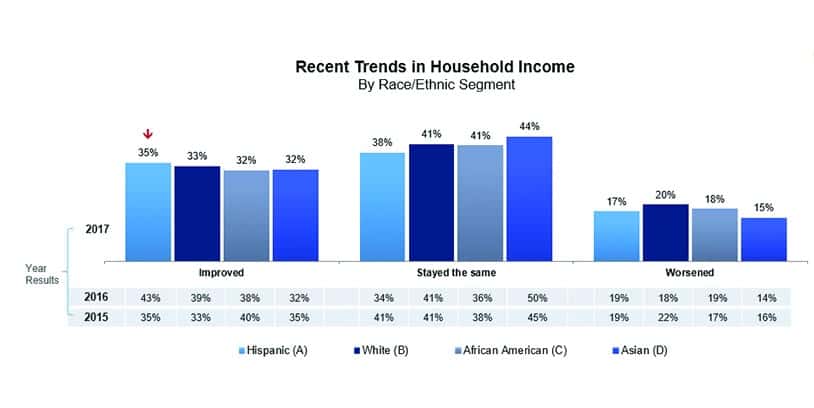 Aside from all the brilliant points, Americans, in general, seem to be more optimistic about the economy in the U.S. in 2018.

A combined 40% is not sure or feels it will get worse. However, a clearer picture emerges when we ask what effect the current political climate has on personal perspectives for 2018.

Given the current political climate, almost as many people are pessimistic about 2018 as optimistic. This polarization in the vision of consumer confidence imitates the current political polarization in which we find ourselves and gives more context to the fall in optimism for 2018 and the unwillingness of consumers to make large purchases in 2018.

In addition, as our research and the Census research has demonstrated, we are coming out of a record year for revenue growth. Consumers, naturally, feel less optimistic, financially, after a good year. But, consumers still have concerns about the financial markets, which could affect their future ability to spend in the future, causing discomfort.

While consumer confidence, in general, is divided over the prospects of the economy, there are bright spots for brands seeking to enter multicultural markets with thoughtful campaigns that are sensitive to the real areas of concern that these consumers are feeling.

Hispanic and African-American consumers experienced an increase in income in 2017 and are looking to spend, but African-Americans are also the least optimistic about improving the economy by 2018. The brand that reaches the correct equilibrium will have the best impact.