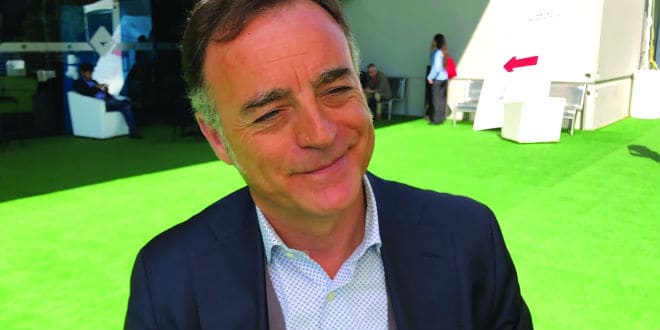 If there is someone in the world of the food industry expositions, who can successfully organize commercial events, we have to talk about J. Antoni Valls, Director of Alimentaria Exhibitions.

Valls was born in Spain, a fervent soccer fan who fondly remembers North Carolina in the United States, where he lived and studied for some years. He is an executive who works tirelessly to achieve the internationalization and commercialization of products and grocery companies, through the organization he leads.

In an interview with Abasto Magazine, in the midst of his busy work schedule during Expo ANTAD & Alimentaria 2019 in Guadalajara, Valls explained in a very humble way, that it was by chance that he ended up involved in the international food exhibition industry.

But his career and passion for the food industry and for gastronomy marked the path of Valls to take him to the position that he occupies today leading Alimentaria Exhibitions, based in Barcelona, ​​Spain and is also a partner of Expo Antad in Guadalajara, the most important food trade show in Latin America.

“We had been working with Alimentaria México for about 12 years doing the Expo in Mexico City … We saw Mexico as a hub, very well positioned, but after 10 years we did not get our Alimentaria in Mexico City to have, in any way, an enough organic growth,” said Valls.

He added that “fundamentally, all the suppliers in the country were present at Expo ANTAD, but at the same time, they did not have the international offer character of our Expo in Mexico City. From there, the dialogues began in 2014 and at the end of 2015 we signed an alliance that fundamentally complemented us, that is, Alimentaria contributed its knowledge, its ‘know how’ in the international arena and, for its part, Expo ANTAD reinforced all the part of suppliers, national retailers.”

The result of three years of partnership is a trade fair considered the most important in Latin America with the presence of about 30 countries.

Related Article: Authenticity: Key for Latin American Food Brands That Want to Sell in The U.S.

Valls stressed that the society of Alimentaria with Expo ANTAD will continue to grow and explains that Mexico is a country with 125 million inhabitants, where consumers in general have evolved a lot during the last decade and consumption habits are changing.

With his commercial vision, Antoni Valls knows where the market opportunities are and cites as an example that some ten million Mexican consumers are buyers of gourmet products and delicatessen, “that’s a piece of the market, all you have to do is be very clear about the penetration strategy to reach that group of consumers and this we have it covered with the international offer that is held at the Expo ANTAD,” said the executive.

On his vision of the future of Expo ANTAD & Alimentaria and looking towards business relations with the United States, Valls told Abasto:

“My vision is very clear, nothing is forever and we must reinvent ourselves permanently. Therefore, I believe that this Expo, which already had a degree of maturity in 2015 with many products on the market, began a renewal cycle with the entry of Alimentaria, which led to an internal sector organization providing it with a more formative and experiential character. The Expo must respond to new niches and categories, there is space in the food to grow, absolutely.”