Home » News » A world of opportunities at Expo ANTAD & Alimentaria 2019 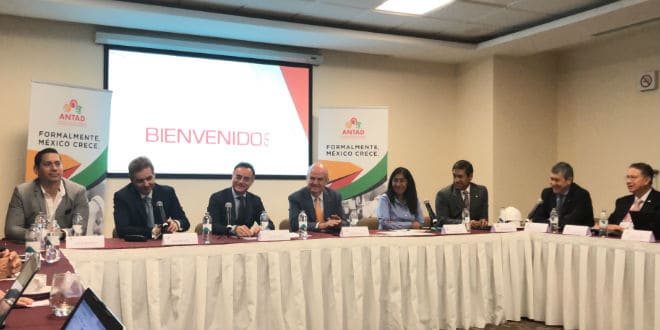 More than 49,000 visitors from 48 countries will fill the Expo Guadalajara Convention Center between March 5th and 7th, where Expo ANTAD & Alimentaria 2019 will take place, the most important business forum for the retail sector and the food industry in Latin America.

The event will be attended by 1,900 national and international companies in an exhibition space of 55,000 square meters. The exhibiting and commercial offer will include food and beverages; general merchandise; transport; furniture and equipment; hygiene, health and personal care, among other sectors.

“At Expo Antad & Alimentaria México 2019 and its international business network, more than $ 15 billion pesos are generated in business over the next three days, that is what we expect to be generated here,” said Vicente Yáñez Solloa, Executive President of the National Association of Self-Service Stores (ANTAD), during a press conference prior to the official inauguration of the trade fair in Guadalajara.

Expo ANTAD & Alimentaria is considered the largest food and beverage trade fair in Latin America. Its mission is to contribute to the promotion of the main chains through the National Association of Self-Service and Departmental Stores, a network made up of more than 100 associated chains that represent more than 58,000 self-service, departmental and specialized stores throughout Mexico.

The forum helps promote the commercial development of micro, small and medium-sized companies to facilitate their integration into large commercial chains. During the three days event, leaders of the retail sector, of HORECA (Hotels, Restaurants and Catering) and the Food Chain will be present.

This year, the Region of Honor guest is the European Union, which in its business showroom 20 companies will present their products, they will also have cooking demonstrations and information sessions so that attendees know about the safety and quality of European products.

The European Union is the third largest trading partner in Mexico. In 2017, trade between the EU and the Aztec country grew by 16.8%, amounted to $62,000 million euros for goods and $15,000 million euros for services. Within the framework of the food fair, the government of Jalisco will be making agricultural project agreements with the European Union.

On trade relations with the United States and the impact that the new US, Mexican and Canadian trade agreement may have, as well as the tariffs on certain products, Antoni Valls, general director of Alimentaria Exhibitions, told Abasto that “the implementation of the agreements we will see it shortly, we hope that everything continues in the same way, both for the benefit of the Mexican agri-food products and the dependence of the United States, and not only with the Mexican community that lives in the US but moves beyond, now the Mexican agri-food products has a very high consumption among the American population.”

Ricardo Márquez, director of Alimentaria México, said “the institutional presence of the EU in the trade fair under this new relational framework is very positive for the European food industry, since it creates new opportunities for export, growth and promotion for a strategic sector in the continent’s economy. “

Márquez took over the management of Expo ANTAD & Alimentaria México in September 2018. Born in Mexico, the executive was trained in the United States of America – the country where he began his professional career – and moved to Barcelona in 2013 to pursue an MBA at the ESADE Business School.

One of the priorities of Márquez as the new director of Alimentaria México will be to promote the internationalization of the exhibiting companies in this professional exhibition that is already a leader in Latin America.

Expo ANTAD 2019 will include a program of conferences and specialized seminars where it is expected to train more than 4,000 participants. National and international speakers will offer their knowledge in the forum of fresh products; networking; electronic commerce; commercial activations; activities focused on promoting new concepts and business opportunities.

Exhibitions will be held on new trends focused on Marketing, Advertising, Media and Consumer, taught by experts from the retail sector and HORECA.

During the Expo ANTAD & Alimentaria last year, according to the event organizers, nearly $ 745 million ($ 14 billion pesos) in sales were generated.