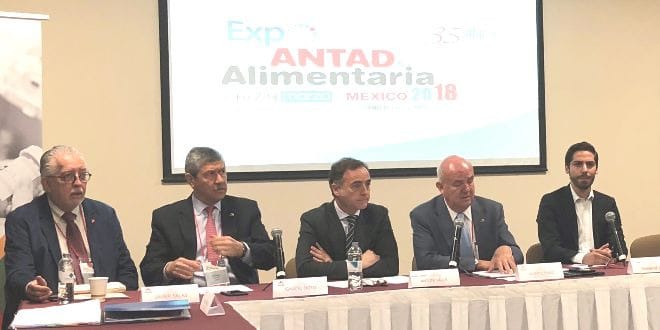 The ANTAD & Alimentaria Expo began in Guadalajara, Mexico today, where it is expected to generate close to $745 million (14 billion pesos) in sales during the three days of the event.

A total of 1,900 exhibiting companies from 30 countries will present 46,000 visitors with their products and services and training will be offered to more than 4,000 participants with the program of conferences that will be held in four forums.

A 70% of the exhibiting companies belong to the food and beverage section and will be presenting 660 new products.

In a press conference, Vicente Yáñez, president of the National Association of Self-Service and Department Stores (ANTAD by its Spanish title), said, “for 35 years this business forum has brought together national and international buyers seeking to transcend borders, at Expo ANTAD & Alimentaria México, they can identify new alternatives that allow them to expand their business vision.”

Yáñez stressed that given the importance of the internationalization of Mexican companies, PROMÉXICO will be promoting business meetings at the event “to strengthen the participation of national companies in international markets.”

This year, Campeche is the guest state of the Expo and will have a representation of 24 companies on the exhibition floor. The director of PROCAMPECHE, Violeta Solórzano Cortés, explained to Abasto magazine that that the entity she directs is committed to preparing companies to comply with all the certifications and standards established by the United States to export novel products that are in high demand in the Hispanic market in the U.S.

Expo ANTAD has become an international forum of reference in the circuit of fairs of the agri-food sector and retail in America, said Antonio Valls, the general director of Alimentaria Exhibitions, who added that the number of international exhibiting companies that are present in the event approaches 400.

280 Buyers from American Chains at the Antad & Alimentaria Expo

On the state of commercial relations with American companies and the interest to do business with the food industry in Mexico, Ignacio Tatto, operations director, told Abasto magazine that, “on this occasion we have about 280 buyers of American chains that will be present touring the floor, doing business and we present ourselves during the year both in Chicago and in California to promote Expo Antad. These meetings are always very successful and we even have an office in Los Angeles to be in contact with these buyers.”

Tatto said that the Mexican national products, nostalgia products, “are very sought after in the United States, not only by the Latin ethnic groups, but are already very well seen in the oriental communities.”

The future growth of food trade between Mexico and the US depends on the negotiations that are currently underway to renew the North American Free Trade Agreement (NAFTA). In a tweet written by President Donald Trump, he put a new point of pressure on these negotiations by demanding a new “Fair” NAFTA for the US as a condition for not imposing import tariffs on steel and aluminum.

For Yáñez, this is just another trick by President Trump to take advantage of the negotiations.

“As in any negotiation, there are negotiation styles. That’s why they mentioned that President Trump, in his time as a real estate developer, even threw cockroaches at buildings to make them worth less, rats and so on, and then buy them cheaper. They are negotiation issues and I believe that Mexico has a very prepared negotiation team. The teams are very in touch with the companies and the companies will do their best so that they do not lose that competitiveness, “Yáñez said.

He added that “I think that (Trump’s pressure) is part of those negotiations, maybe it’s the cockroaches of negotiation if we want to call it that and the negotiating teams will have to have a cold mind for this issue.”