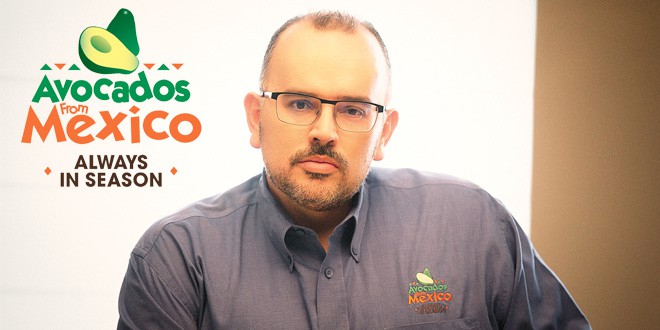 Hispanic Heritage Month, celebrated in the United States from September 15 to October 15, is the perfect occasion to highlight the life and work of Hispanic executive Álvaro Luque, who is succeeding in the U.S. food industry.

With ingenious marketing campaigns, Luque is positioning Mexican avocados as one of the best ambassadors of Hispanic culture in the U.S.

Luque, CEO of Avocados From Mexico (AFM), has a passion for marketing, and he has more than 20 years of experience working in the food industry.

He began his professional career in his native Costa Rica, where he held important positions in the marketing area for the Latin American and Central American markets for Gruma’s Maseca, a Mexican multinational corn flour and tortilla manufacturing company.

In 2014, Luque was presented with the opportunity to take a new step in his professional career development and accepted the role of CEO of Avocados From Mexico, a non-profit organization based in Irving, Texas.

This organization was created by the Mexican Hass Avocado Importers Association (MHAIA) and the Association of Avocado Growers and Packers of Mexico (APEAM, acronym in Spanish for “Asociación de Productores y Empacadores Exportadores de Aguacate de México”) with the sole purpose of promoting the Mexican avocado in the U.S.

In the light of Hispanic Heritage Month, Abasto Magazine spoke with Álvaro Luque to learn about his work as the head of Avocados From Mexico.

Our goal was to analyze and determine how Hispanic culture in the U.S. is gaining ground, in this case, through marketing and consumption of the Mexican avocado.

AM: What is the value (or meaning) of celebrating Hispanic Heritage Month in the U.S. for you?

Álvaro Luque (AL): It has a high value for several reasons. First and foremost, it’s a recognition the country makes to a multicultural minority which is (or has) become a majority in terms of economic and cultural influence.

The growing power that Hispanics have is something to watch out for in the coming years. This demographic is a significant segment that is young and thriving and shaping the United States in positive ways.

That is why it is very gratifying to see the United States recognizes Hispanics’ culture and contributions for a month.

Hispanic Heritage Month is also a very fulfilling experience for many Hispanics, as several Latin American countries celebrate their independence day during that period.

For a Costa Ricans and Mexican, September 15 is a celebration. During this date, as a citizen of these two countries, you have the opportunity for a double celebration.

As a Hispanic, you are being celebrated in the United States during Hispanic Heritage Month. But some also celebrate the independence of their countries.

From a marketing perspective, the “blend” that Hispanic culture and American culture are yielding is fascinating. Much of the celebration of Hispanic Heritage Month is not only an occasion to promote and celebrate Hispanic contributions. It’s also a good window of opportunity for businesses looking to make that crossover into the Hispanic consumer. That is where we’ve identified commercial and marketing opportunities, taking advantage of this “crossover” of two cultures that we have this month.

AM: How was your experience in adapting to the U.S. lifestyle and work-life?

AL: It’s been a beneficial step for my career. When it comes to employment and professionalism, The United States is more organized as a society. Therefore, the experience I acquired here completed my experience from the jobs I’ve had in the past in Latin America.

I have stayed in an area with a lot of Hispanic-Latin influence. Just in Avocados From Mexico, we have a quite diverse company where roughly 40 percent of our associates are of Hispanic origin.

AM: How do you see the influence of Hispanic Heritage Month in the U.S. commercial sector?

AL: From a commercial standpoint, the opportunity is the crossover I previously talked about, which means, how chains like Publix and Kroger are taking advantage of this Hispanic celebration to reach this vast market.

Brands like ours have a perfect crossover among the two groups of consumers (general population and Hispanics), which allows us to join programs.

Commercially speaking, the topic of American companies trying to enter into the world of Hispanic Heritage Month to reach this demographic is exciting.

AM: Why do you think we are increasingly having more influence in the U.S. market?

AL: Although we represent only 20% of the total population in the U.S., we are 20% potentially powerful.

For instance, there is a huge difference between the average age of Hispanics compared to whites in the United States. That little difference makes that the growth in the next 25 years will be dominated by groups such as Hispanics.

There is also an interesting phenomenon happening among Hispanic Millennials. They tend to be more mature than white Millenials as Hispanics marry younger and start their families at an earlier age. As a result, you have a group of Hispanic Millennials that think more responsibly.

I believe that the companies and brands that want to stay ahead of the Hispanic consumer curve need to realize the acquisition power of Hispanics is growing rapidly within the U.S.

This wave of opportunities for companies needs to be ridden within the next 15 to 20 years, or companies will miss out on the portability this opportunity brings.

R.A.: Avocados From Mexico marketing campaigns not only represent the value of a Mexican fruit but the richness of the Hispanic culture. How do you develop this message?

AL: We are very respectful and proud of where we come from. We know that Mexico is the number one producer of avocados in the world, but we also understand the diversity of the Hispanic market in the United States.

To precisely answer your question, we had just carried out a study with Hispanics. We wanted to find out if we were alienating Colombians, Costa Ricans, Hondurans, Cubans, Puerto Ricans or other countries by having the message “Avocados from Mexico” everywhere in our communication outlets.

The results were positive. We found that there is respect, general pride by Hispanics for avocados that come from Mexico.

R.A.: You have become a successful Hispanic executive in charge of a major company in the U.S., what does the future hold for Álvaro Luque?

AL: I think I have found my company and my passion industry in my life. I still see a lot of future in my professional career in this area.

Since taking Avocados from Mexico, in less than six years we have practically doubled imports from Mexico, growing them by about 92%. That is very impressive for any market.

Nonetheless, there is still a massive opportunity for growth. I think that the United States could become the number one consumer of avocados in the world, per capita, even above Mexico.

As long as Avocados From Mexico maintains an aggressive marketing program, we will continue to grow these numbers. This growth will naturally give us more resources to continue developing the avocado category and developing this brand.

Related Article: Avocados From Mexico Super Bowl Ad Was One of The Most Watched

We have a great team in our company, and I see myself working with them for many years to come.

Mexican Avocado: A Great Hispanic Ambassador in the US

A 2018 Texas A&M University study concluded that the importation of avocados from Mexico has a positive impact on the U.S. economy and will continue to stimulate its growth.

The researchers backed their approach on the economic contribution, referring to the idea that money spent in a region stimulates additional commercial activity as it circulates through the economy.

The study established that Mexican avocado imports contributed to the U.S. economy in 2017 as follows:

What Happens to Your Body If You Eat Avocado Every Day?

How would your body respond if you ate just one avocado a day? In fact, it would transform your life as you’d get amazing results. Take a look!

We are curious: Do you buy, eat or sell avocados? Whatever your experience with this delicious food is, tell us how it has benefited you? Also, Do you have something to say to Álvaro Luque? Comment below!