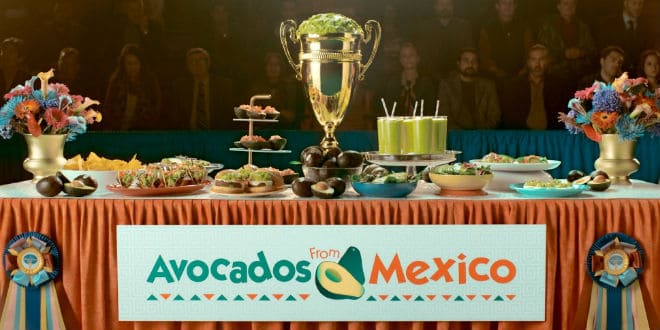 Avocados From Mexico commercial investment was a whopping $5 million for a 30-second spot during the second quarter of the Super Bowl LIII game on Sunday night.

They won viewers’ attention with humor, showing that avocados are always worth it, this time with the help of a few canine friends.

This is the fifth year an Avocados From Mexico Super Bowl ad goes live during the Super Bowl game. Aside from this huge marketing move, they also use social media as a marketing platform in a successful and original way.

“Avocados From Mexico is excited to return to the Big Game bringing good memories and laughs to those watching across the world – avocados are all about having a good time and we know people will go to great lengths for them,” said Alvaro Luque, president of the company.

“We are so thrilled with this year’s creative concept bringing to life how much people love avocados in a unique, positive way that’s entertaining to everyone.”

The Avocados From Mexico commercial spots that air during the Super Bowl are the other great protagonists of this sports event that is seen on TV by more than 100 million viewers. The brands make the most of this exposure not only on the night of the game but also in the days leading up to the event and after the event by using social media to keep the audience even more engaged and bring awareness to their brands.

Related Article: Avocado is the “Green Gold” of Mexico

The tables are turned as dogs proudly watch their humans while they compete for Avocados From Mexico, performing different commands from sit to shake to stay. Actress and singer, Kristin Chenoweth, stars in the ad and serves as celebrity host of the Human Canine Show.

The success of the avocado commercial

According to social media measurement company Brandwatch, Avocados From Mexico’s ad, during the week leading up to the Super Bowl LIII game, had nearly 20,000 mentions, more than 40,000 online views, and 340 million impressions, according to iSpot.

In fact, the most-used social media hashtags around the Super Bowl revolve around the company’s ad, said Brandwatch.

During the game, according to Brandwatch, the ad ranked fifth among the top 10 TV commercials which generated the most interest, reaching 16,000 online mentions.

Avocados From Mexico (AFM) is a wholly-owned subsidiary of the Mexican Hass Avocado Importers Association (MHAIA), formed for the purpose of advertising, promotion, public relations, and research for all stakeholders of Avocados From Mexico.