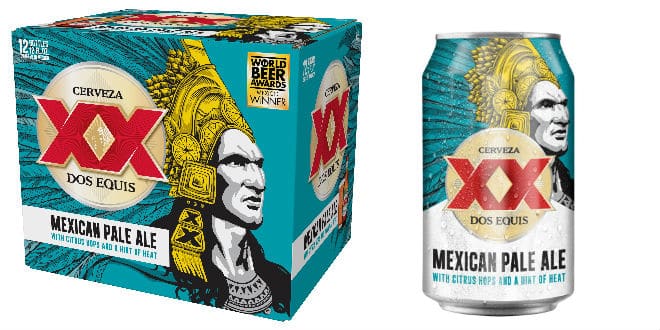 Top Mexican Import Dos Equis® is debuting a new beer to drive brand penetration and drive store traffic with the launch of a Mexican Pale Ale [MPA]. With unique citrus hops and a hint of spicy heat on the finish, Dos Equis MPA is a traditional Pale Ale with a Mexican twist.

After several months in testing in select on-premise accounts, this deliciously sessionable Mexican Pale Ale is rolling out to off-premise outlets in the sunbelt in February 2019. Dos Equis MPA will be available in 12-pack bottles and cans and 6-pack bottles.

“When we think Pale Ale, we think IPA. With the use of citrus hops and peppers, Dos Equis® is taking the Pale Ale brewing process and adding a Mexican twist that delivers a fresh, subtly spicy taste. Off-premise distribution is a playground for beer enthusiasts to experiment with new brews, and thus offers us a perfect opportunity to engage with beer lovers looking for an interesting play on tradition,” added Certilman.

With Mexican Imports contributing 93% of total Import category growth and with craft drinkers more likely to buy Dos Equis® than other Mexican Imports, Dos Equis® aims to tap into a sizeable volume opportunity with Mexican Pale Ale: consumers who drink both mainstream and craft and who seek easy-to-drink craft varieties made by reputable brands they know and trust.

With off-premise distribution and marketing efforts focused in the core Dos Equis® markets of Texas and New Mexico, the national launch will be supported with features and displays, high impact merchandising materials, consumer sampling (where legal) and local media. Success with this new offering will establish Dos Equis® Mexican Pale Ale as a viable new beer; one that gives retailers incremental sales and profit opportunities.