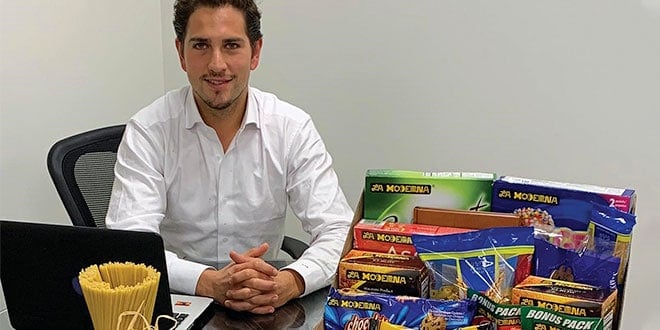 The young Mexican executive Esteban Abascal began the new year with a great responsibility on his shoulders, but with the total conviction that in 2019, as the new CEO of Interamerican Foods and La Moderna USA, his company will take a big step in its mission of expansion in the U.S. market.

Last December, Abascal, 31, took the chair as CEO and is now in charge of all the company’s operations in the United States. Previously, he was the U.S. Sales Director of La Moderna Group.

Ten years ago, when he was presenting his degree thesis in International Business, one of the directors of La Moderna in México proposed to him that he should make his thesis a reality, working for his company. Abascal accepted the proposal and joined the group as an export analyst.

Since then, he demonstrated his great business and leadership skills, rising in La Moderna Group, as export coordinator, then manager in the United States and later took control of the global exports and sales in the US.

His two passions are sports and work. “Being in love with your work and enjoying it, makes things easy and gives the right results. For me, it’s the dream job.”

Abasto interviewed Esteban Abascal to learn, first hand, what his plans are so that the company’s businesses continue to prosper and open new doors in the U.S.

ABASTO MAGAZINE: WITH THE NEW PRODUCTION PLANT INAUGURATED IN TEXAS AT THE BEGINNING OF 2018, WHAT ARE THE PLANS TO KEEP GROWING IN THE U.S.?

ESTEBAN ABASCAL: We opened this factory in March, which consolidates the objective and vision of the company in the United States. I believe that the American market has been gaining importance for La Moderna Group and proof of this is the important step that the company took to open its first factory in the US with an investment of $50 million … With this big step, the company has in the horizon to expand not only the market and the places we have penetrated, but also expanding the offer of products that we want to deliver. Being local manufacturers, it opens up new local markets, new clients.

AM: AS A NEW CEO, HOW DO YOU INTEND TO GO BEYOND THE HISPANIC MARKET TO CONQUER THE PALATE OF THE ANGLO CONSUMER?

EA: One of my goals is the issue of positioning ourselves in the shelves of American families. I believe that La Moderna, throughout these years that it has had operations in the United States, has achieved a great recognition among the Hispanic community and we are well represented in the homes of Hispanics, but one of my main objectives, as CEO of the company, is to grow in the American market.

AM: LOOKING AT THIS GENERATIONAL GROUP OF MILLENNIALS AND YOU BEING PART OF THEM, WHAT CAN YOUR COMPANY OFFER TO THE NEW GENERATIONS?

EA: On this point, the truth is that pasta is such a noble food and has the advantage that it is well received by different generations, from the Baby Boomers to the later generations, gen Z, the Millennials. But I think the biggest challenge is how to link the brand with these generations because over time we have seen that it is not the same to make an approach with a Millennial than with an older generation like the Baby Boomers … Yes, we want to reach these new generations, we have to create strategies that are created by Millennials themselves because these young consumers are also more concerned about the nutritional information of what they are eating. With this idea, of course, the company is looking for new products that can be attractive for these generations and we see the consumption trends of gluten-free, whole grain products, with healthier ingredients, to build the company’s global strategy and satisfy all the needs of our consumers.

AM: HISPANIC COMPANIES THAT SEEK TO SUCCEED IN THE US FACE MANY DIFFICULTIES. FROM YOUR POINT OF VIEW, WHAT CHALLENGES HAS YOUR COMPANY HAD AND HOW HAVE YOU MANAGED TO OVERCOME THEM?

EA: Being a foreign company, there are always many challenges and many difficulties along the way and I believe that these will never cease to exist, in addition to cultural barriers, because the way of doing business in a foreign country is complicated by the language, the traditions. This affects the continuity of any business abroad. But one of the tips I could give is that at the end of the day, persistence is fundamental, you have to fight for things to succeed and you need to seek good advice to do business in this country, that’s basic. The important thing is to know how to get up when we face setbacks, because perseverance is the best friend of success.

AM: WHAT PROJECTIONS DO YOU HAVE FOR 2019, WHAT IS YOUR MAIN CHALLENGE?

EA: The first challenge is that this factory in Texas was planned and built to almost double the production of what is now sold in the United States. So now the first step is to fill the capacity of the production lines that houses this factory because we still have it as a challenge. For me it is an objective that by the end of 2019 we reach 90 to 95% of the installed capacity, in order to start recovering the investment that was made. We have opportunities in niche markets that we did not have before and we will be in the shelves of American consumers.

La Moderna, founded in 1920, is the largest pasta manufacturer in México with total sales in excess of $500 million. The new 150,000-square-foot plant in Cleburne, Texas, has the capacity to produce 7.4 million pounds of different types of pasta per month.